This Brooklyn Apartment Has Bed Bugs, Not That The Landlord Will Tell You That

It's a classic New York tale: A Clinton Hill apartment is suddenly inundated with bed bugs. Its tenants fight the bed bugs, but the bed bugs, having a larger army and hundreds more legs, win. Drained of energy and resources, the tenants move out, and the landlord jacks up the rent on the place—which still, by the way, has bed bugs.

This is the story told to us by Tyler Coates, who along with his roommate succumbed to bed bugs after more than a year of valiant battle. Coates tried all the usual tactics—spraying, washing, vacuuming, baking the living shit out of everything. After several months of no sightings, he thought he was liberated from the tiny wretches—that is, until his apartment building caught fire. Though fortunately there was no damage to his apartment itself, something about the flames drove the bed bugs back with a vengeance.

Fatigued from battle and tired of fighting, Coates and his roommate threw in the towel, abandoning the apartment they'd inhabited for three years. Coates moved in with his boyfriend while he searched for a new place, and that's when he came across this listing on Craigslist. For his apartment. For an additional $800 per month.

"The curtains I left up are still there!" he said.

Out of basic human curiosity, we emailed the landlord to inquire about the place—has it ever, by chance, had bed bugs? "Never had bedbugs thank god," was his rapid response.

HUH. Isn't it illegal for a landlord not to disclose whether a property is riddled with tiny fleck-sized vampires from hell? Yep—it's called the Bed Bug Disclosure Act and it was signed into law in 2010.

This story is not unique, of course. Every day, landlords lure another sucker into their traps, baiting desperate New Yorkers with the empty promise of a better real estate life. But if we can stop just one shady landlord from profiting from others' misery, we'll have earned our paycheck this day.

Oh, and also, Coates said: There's no live-in super. And the kitchen floors are "definitely not" marble. Do not call Jacob. Do not pass Go. Do not live in this apartment. The end.

Update: Here's a screenshot of the listing, which has been flagged for removal. 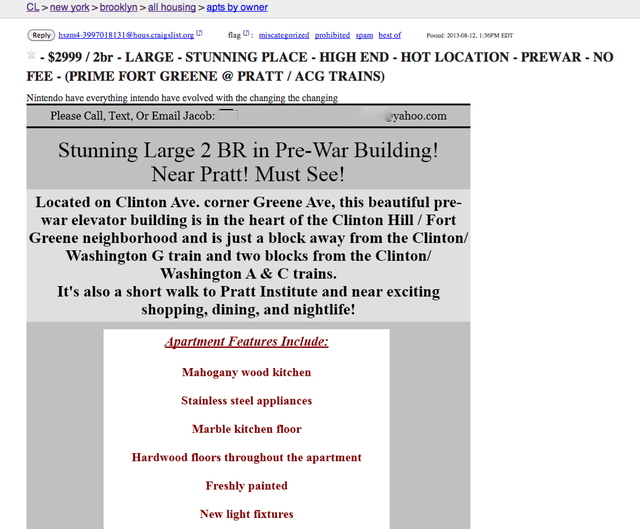