Thirteen people have been arrested in connection with an "exceedingly dangerous" batch of K2 that led to nearly 50 overdoses throughout North Brooklyn this weekend, officials said.

On Monday night, the NYPD issued an advisory warning Brooklyn residents of the particularly toxic strain of the synthetic drug. Forty-nine people have overdosed at five locations throughout the borough since Friday, police said. Those include 15 overdoses in the vicinity of Myrtle Avenue and Broadway, 21 overdoses at 2570 Fulton Street, seven at 599 Ralph Avenue, two at 2399 Van Sinderen Avenue, and four at 2402 Atlantic Avenue.

"K2 is a dangerous, deadly drug, but this strain is especially threatening," NYPD Chief of Department Terence Monahan said in a statement. "All residents who live near these five locations are warned about exceedingly dangerous K2 batches in circulation, and advised to avoid usage. Residents are urged to call 911 immediately if they or someone they know are showing symptoms of overdoses."

After 16 people at the intersection of Myrtle Avenue and Broadway were hospitalized on Saturday, police arrested three employees of two nearby bodegas—Big Boy Deli and Starr Deli—on charges of selling untaxed cigarettes. Big Boy Deli, which two years ago was accused of supplying K2 in another mass overdose incident, has been shuttered since Saturday evening. An NYPD spokesperson would not say why the deli was closed, nor confirm that it was closed under order from the NYPD. 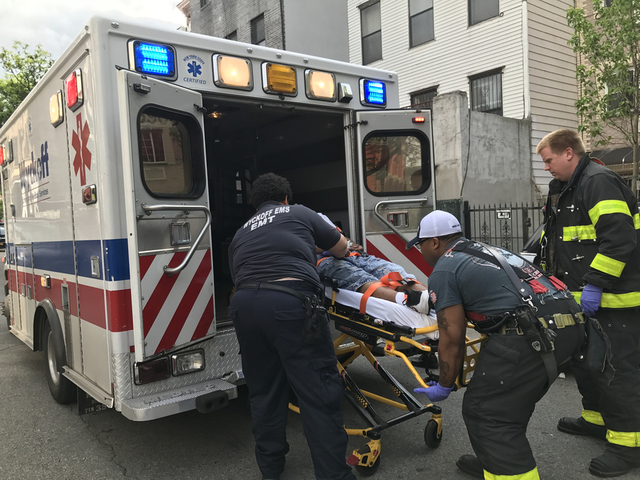 "The precinct is harassing us for no reason, when I call them every day about these guys and they do nothing," manager Mustafa Alsaidi told Gothamist over the weekend. "I told them to break the store down—they're not going to find any K2. We've been shut down for 24 hours and it's still happening."

According to Brooklyn Councilman Robert Cornegy Jr., the delis may still be playing a role in distributing the drug, even if they're no longer selling it out of their stores.

"Some of the local shop owners are now using what’s called runners," the councilmember, who represents Bed-Stuy, said over the weekend, according to amNewYork. "So, not selling it absolutely out of the store, but having people who are working outside of the store who are loosely associated with the stores doing their business for them."

Over the weekend, multiple people told Gothamist that the drugs were being sold on the street. The NYPD has not responded to inquiry about the additional 10 arrests made in the last few days. Their investigation is ongoing and we'll update this post as we learn more.

#brooklyn
#dcpi
#k2
#k2 overdose
#myrtle avenue and broadway
#nypd
#synthetic marijuana
Do you know the scoop? Comment below or Send us a Tip