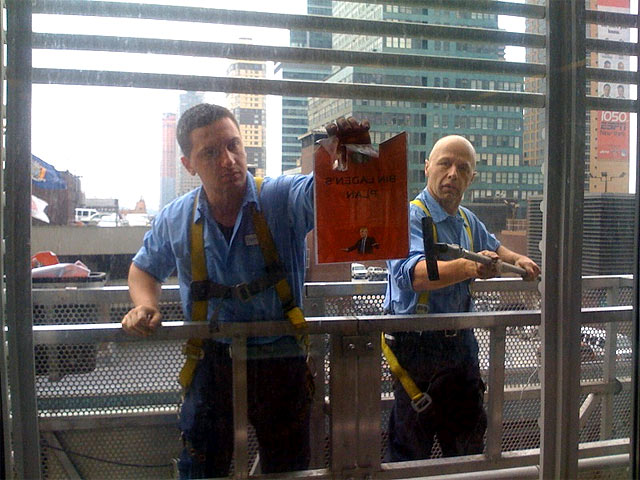 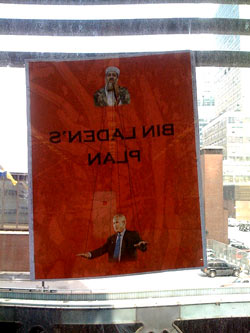 Earlier this morning, a man was arrested after climbing on the New York Times Building's exterior, making him the third person to do so in six weeks. The man, 29-year-old David Malone, hung a banner over the banner to help promote his book about Osama Bin Laden; while he started up the building at 1:30 a.m., he wasn't apprehended until 5:20 a.m.

Malone had called the Daily News, explaining he selected the early morning for the climb/protest because he was "trying to minimize any disturbance - any breach of the peace." He did, however, leave behind a flyer on some windows, which were removed by building staff later. Luckily, someone took photos.

According to his website, Bin Laden's Plan, Malone "successfully predicted some of the major events of Bin Laden's war, including: the initiation of the 9/11 plot in July 1999, the execution of the 9/11 attack in 2001... the American invasion of Iraq and capture of Saddam Hussein in 2003..." The News reported that Malone (who spoke in a "detached monotone") as saying, "I'm trying to help America."

Now the NY Times Company will remove some of the rods (aka rungs to the climbers) that have made these ascent easy.

#climbers
#David Malone
#new york times building
#scaling buildings
Do you know the scoop? Comment below or Send us a Tip