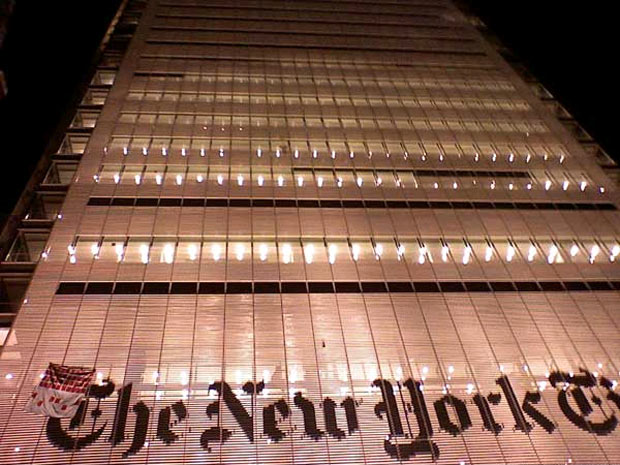 So much for the security modifications outside: Over night, a third person managed a climb on the exterior of the New York Times Building on Eighth Avenue at 41st Street in Midtown Manhattan. The first reports of his presence were around 1:30 a.m., and the NY Times reports, "after staying on the building for about four hours, the man surrendered to police officers and was arrested around 5:20 a.m." 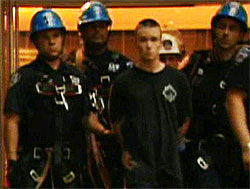 The climber is identified as David Malone (pictured). The Daily News says he contacted their paper and "acknowledged he was after the same free publicity the earlier pair [of climbers] received." Mr. Malone, consider it a done deal! From the Daily News:

He hung a banner over the first "T" of The New York Times sign that featured a picture of terror kingpin Osama Bin Laden holding President Bush like a puppet.

On it were the words "Bin Laden's Plan" - the title of his book and Web site.

He said he wanted to protest Al Qaeda's "crusader baiting," and that the terror group's "intentional provocation of the U.S." was the greatest threat to American national security.

The News goes onto to say that Malone calls himself a 29-year-old University of Michigan drop out (he dropped out "in 1995 to study Al Qaeda full-time").

Malone made it to the 11th floor, unlike professional climber Alain Robert who climbed the whole building first on June 5 and and Rey Clarke, who also scaled the whole height of the building hours after Robert. Apparently the cops cut a hole through a fifth floor window to try and catch Malone, but were unable to. The Times added, "The climbing episodes have at this point become something of an embarrassment for The Times." Or a resounding success to have the most climb-able building ever!