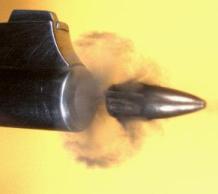 Yesterday afternoon, a 13-year-old was shot in the ankle as he walked home from school in Brownsville. A grocery owner told the Post the boy fell in front of his store, crying, "I got shot! I got shot!" and witnesses say that some "older youths had been running down the street - one firing at least four shots at the other."

This past weekend, a 3-year-old was grazed by a bullet while in Bed-Stuy. Last week, 16-year-old Tavin Alves was shot in the head when he looked out his window and later died from his injuries. It turns out that the man who shot Alves, Sean Gordon, has been on probation (he's been arrested 17 times) and possibly should have been in jail for a drug arrest, but was released early. We were reminded of this part of the 1990 Time article about NYC's decline:

This summer, in one eight-day period, four children were killed by stray gunshots as they played on the sidewalks, toddled in their grandmother's kitchens or slept soundly in their own beds. Six others have been wounded since late June. So many have died that a new slang term has been coined to describe them: "mushrooms," as vulnerable as tiny plants that spring up underfoot.

Certainly, crime has decreased dramatically since 1990, but Mayor Bloomberg said yesterday, "We have to get guns out of the hands of criminals. And innocent people, children, are getting shot...There are fewer murders. But one murder is one murder too many, and a lot of these accidental shootings - a lot of them are just graze wounds or flesh wounds - could be fatal wounds with just the tiniest change in the direction of the bullet."

#bed stuy
#bloomberg
#children
#crime
#guns
#mayor
#mayor bloomberg
#murder
#News: NYC
#nyc
#people
#running
Do you know the scoop? Comment below or Send us a Tip
A new Gothamist is coming! We’ve moved comments over to our beta site. Click here to join the conversation and get a preview of our new website.