Things With Stephon Starting to Get Awkward 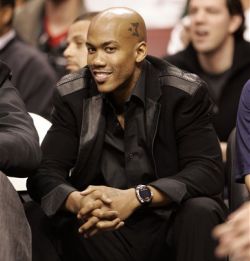 In the Knicks' 116-87 loss last night to the 76ers, Stephon Marbury once again found himself on the bench and not in action throughout the course of the game. But unlike the season opener, Marbury was prepped for his bench time by Coach Mike D'Antoni and supported the team while in street clothes. Now the question remains: what the heck do the Knicks do with him?

The Knicks placed Marbury on the Inactive List after Coach D'Antoni pulled a surprise move on everyone (including Stephon) and refused to put him in during the Knicks first game. Marbury's $21 million contract makes the prospect of a trade for the star point guard unappealing to most teams, who are also unlikely eager to want to deal with "Starbury's" unique personality quirks and off-court troubles. But the writing appears to be on the wall for his exit with D'Antoni saying last night, "It's not that he's done anything (wrong). It's just the team is going in a different direction."

But since Marbury has been on his best behavior thus far this year, asking him to stay home isn't really an option. Thus the pressure's on team president Donnie Walsh to consider waving him and eating the contract, something Walsh admits to considering. He'd obviously much prefer a buyout, but Marbury says he "wants every penny."

New coach D'Antoni hasn't exactly been on his best behavior in the nascent stages of the season. Yesterday he made the back cover of local papers after being caught on camera mouthing back at fans who began chanting for him to put in Marbury during the Knicks opening night route of Miami. When D'Antoni heard the calls for Stephon, he retorted, "You've got to be fucking kidding me. What a bunch of assholes."