Last night's Official Campaign Finance Board Public Advocate debate turned into a battle of the narratives, with each of the five Democratic party candidates clamoring to prove their backstory made them uniquely suited to take current Public Advocate Bill de Blasio's job. As for what that job actually is, well, read below to find out!

City Council Member Letitia James, former Deputy Public Advocate Reshma Saujani, college professor Cathy Guerriero, State Senator Daniel Squadron and NYPD community liaison Sidique Wai all took to the stage at the event, which was co-sponsored by Gothamist and our partners. Moderator Errol Louis (NY1) and panelists Brian Lehrer (WNYC), Courtney Gross (NY1) and Juan Manuel Benitez (NY1 Noticias) were on hand to ply the candidates with questions about how they'd use the Public Advocate's office to better the city of New York, and for most of the candidates, the responses could have served as a run for two positions in city government.

While the Public Advocate's primary job is to serve as a sort of city "watchdog," striving to protect constituents' rights and help give them a legislative voice, it's also often a stepping stone towards a mayoral run; Mark Green, the city's first Public Advocate, ran for mayor against Bloomberg in 2001, and current Public Advocate de Blasio is the apparent Democratic frontrunner for this year's mayoral election. So pay attention now, folks, because for this year's Public Advocate candidates, the campaign rhetoric could very well be a precursor to a fight for the helm of City Hall.

The candidates tackled a number of issues, and a prime concern for most was public education; James, who is currently the perceived frontrunner, argued the Bloomberg administration's handling of the Department of Education has been detrimental to students, and called for a moratorium on school closures and program cuts. "Instead of teaching to the test, what we need is a full-rounded basic education for individuals," she said. "We need to provide arts and culture, and we need to make sure that teachers are respected in the city of New York, and unfortunately, under this administration, he has single-handedly dismantled education in the city of New York."

Both Guerriero, who teaches at Columbia University's Teachers College and at NYU's Steinhardt School of Education, and Squadron, who has a young child preparing to enter the public school system, wanted parents to have more input in their children's education. "If [my wife and I are] told we have no role in his education we're going to pull our hair out," Squadron told the crowd, with Guerriero noting, "We need to aggressively pursue the reduction and change in the laws of power so it goes back into the ground where it belongs."

Candidates were also vocal about increasing focus on science, math, engineering and technology; Saujani repeatedly touted her work with Girls Who Code, an organization geared towards getting young girls up to speed in tech, and argued for more focus on poor and minority-heavy districts. "Instead of having a political debate about education in the city, let's start teaching our kids something that they can go out and get jobs," she said.

Another hot button topic was the NYPD's controversial stop-and-frisk policy. Wai, who works closely with the NYPD and told the panel they would be the first agency he'd investigate as Public Advocate, said he'd written a public policy paper predicting stop and frisk would be a major public safety disaster. Squadron called the policy out for its racial disparity. "Our son hopefully never carries a small amount of marijuana with him, but if he does, he is almost certain not to get a criminal record for it," Squadron said. "His friend, who happens to be a person of color, will be ten times more likely to get a criminal record for it."

James, a former public defender and Assistant Attorney General, called getting stopped-and-frisked a "perverse rite of passage for little boys of color," and said the Constitution should never be suspended in minority communities. And Saujani struck out at Guerriero for referring to stop-and-frisk as "a tool" that was only part of the problem. "Cathy, in New York City, stop-and-frisk might be a tool, but it's a racist tool," she said. "People are being stopped for doing absolutely nothing wrong."

As for dramatic tension, well, the debate didn't quite as heated as the past two Comptroller debates, but claws did come out, particularly when the candidates were given an opportunity to cross-examine one another. When Saujani asked James whether she had ever taken a campaign contribution from a developer while deciding on a project, James skirted around the question, arguing she didn't have to "take any ethics lesson from a Wall Street lawyer," and accusing Saujani of hiding a sketchy hedge fund background from the public.

Saujani, for her part, argued that "there are some corrupt people in Wall Street, and they should be in jail. But there’s also some good working people.” Later, Saujani told us she wanted the government to get tougher with financial institutions. "A more strongly regulated Wall Street will be a more productive one," she said.

James also criticized Squadron's political record and ties to Albany, arguing that he was unable to turn his bills into law. Squadron highlighted his successful work with gun-control legislation. "I am really proud of the work I've done to combat gun violence," he said. "My bill to ban assault weapons in the state became law as part of the Safe Act...As tragic and shocking as Newtown was, and it was, equally tragic and shocking is the daily barrage of tragedy that happens on our streets every day."

And the candidates all seemed concerned with highlighting their own backgrounds, sticking with particular talking points to prove they had the chops to be the Public Advocate. Guerriero, who grew up in Brooklyn and on Staten Island, argued her working class background, pro-Union upbringing and lack of political ties made her "uniquely qualified" to take on the job. "The point is to be outside the system," she said, and noted she was running on the platform as a mother, wife, educator and "faith-based fighter." James, who pushed for more affordable housing and better support of women's health, spoke of her "humble beginnings" growing up in Brooklyn.

Wai, a native of Sierra Leone, said he had the skills to bring people from different backgrounds together. "I come from a background, leaving a small country in West Africa to come here, with $5 in my pocket, and a dream with God on my side," he said. "I have brought about the unification of people who don't even talk to each other." Saujani spoke of her immigrant family and the struggle to financially support them. "I come from nothing. My family came here as refugees...That's who I am." 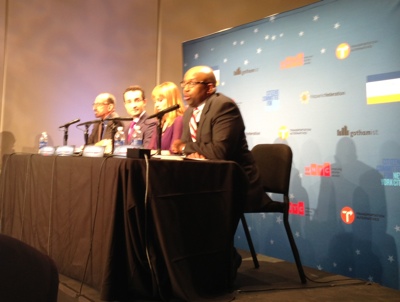 A few fun tidbits also came out during the debate's lightening round: all of the candidates said they preferred the Knicks over the Nets, all the candidates except for James had shopped at Walmart, none had ever purchased a scalped ticket, and Wai was the only one who had ever cast a mayoral vote for Bloomberg. James, Saujani and Squadron support giving the morning-after pill to students without parental consent, while Guerriero and Wai do not (this was a question submitted by the public).

As for whether the candidates wanted to use the Public Advocate platform as a stepping stone for a bigger government position, most argued they were qualified for the mayor's job, particularly when they were asked if they could handle it should something happen to the elected mayor (Public Advocate is next in the line of succession). One candidate, though, wasn't so into it; when Guerriero was asked what her first act as mayor would be, she balked. "To let the city know I don't want this job yet," she said.

The primary will be held on September 10th.