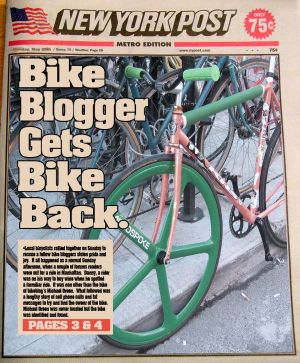 Remember that trusting cyclist who let a complete stranger “try out” his KHS bike – only to watch him pedal away, never to return? The story has a (sort of) happy ending, as the victim, Michael Green, relates in a long post on his blog, which uses that eyesore ‘white text on black background’ format. To spare you the eyestrain, here’s the gist: While Green was out of town this weekend, a couple of his pals in the cycling community spotted his distinctive bike in Alphabet City, being pedaled by “a short Hispanic male, in a cameo thermal shirt who looked very awkward and did not possess the skills to ride a brakeless fixie.”

Green’s pals trailed the suspect to the housing projects on Avenue D and 6th Street, and held back when they observed him meet up with some of his “bigger hommies.” They called for backup, and soon a large “posse” of cyclists had amassed to confront him. “Here's where the details are a bit foggy,” according to Green:

This was obviously about money, the guy said he bought the bike for $150 on Houston street and didn't want to lose money. The bike crew convinced the guy that I was over by the bike polo grounds at Sara D. Roosevelt park on Chrystie street. This was an attempt to get him to a place where there were a whole bunch more bikers who could help out in this. Somehow the guy agreed to go, but not by bike. He had a minivan close by and said he would meet them over there.

The police were called and pulled up while the group was en route to the park, but they refused to intervene, which you'll find to be typical if you haven't registered your bike with your local precinct, which Green had not. Finally, one of his friends talked the suspect into handing over the bike in exchange for $50, “the cops made everyone shake hands in some sort of UN peacekeeping gesture and everyone disbursed.”

And Green tops off his happy ending with a word for the haters who skewered him when Gothamist first reported the incident: “For all those out there who made fun of me on various websites, where I was constructively trying to share my experience with others in the off chance that this could happen, you don't have to sit in silence and shame. There is a vibrant tight knit, awesome bike community out there...doing really positive things and might just go above and beyond to help you out.”