'They Start With The Muslims': Flatbush Community Holds Emergency Meeting On Immigrants' Rights

The event, "State of Immigration, State of Emergency," featured short speeches from several local elected officials, including Williams, State Senator Kevin Parker and Assemblymembers Rodneyse Bichotte and N. Nick Perry, as well as a panel featuring attorneys and immigration experts. The audience reflected the diverse makeup of Flatbush; many of the evening's speeches and comments were translated into Haitian Creole.

"I got friends and family that are not really comfortable with their status," Horsford said, adding that she is a citizen, but that she "would like to know exactly what is going on in the country, politically and immigration-wise, so that I can help."

Williams, who yesterday announced that he will be running for Council speaker, told Gothamist that he organized the event in response to widespread anxiety and confusion among his constituents surrounding the future of immigration laws.

"People are just afraid and so what we wanted to do here is try to address some of that fear with information and knowledge," he said. "I got a text from somebody who has family in Barbados—they were wondering if they would be stopped coming back in. People are hearing a lot of different things and it can be heart-wrenching, and so we're trying to get as much information out as possible."

Williams addressed this sense of fear in his speech. "I can't say, 'Don't be afraid,' but I want folks to have courage in that fear," he said. "I want folks to feel that we're going to do whatever we can on the city and state level to keep this as a sanctuary city." 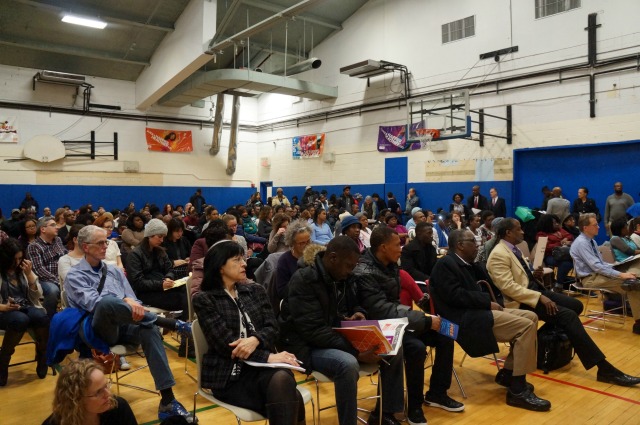 Panelists covered a range of immigration laws and policies, explaining how community members can seek legal protection. Kathrine Russell, who leads the Brooklyn Defender Services's Immigrant Youth and Communities Project, gave a brief summary of Trump's executive order and who it will affect if it is upheld. She also explained some of the alphabet soup of immigration statuses and protections, including Deferred Action for Childhood Arrivals, Temporary Protected Status, and Special Immigrant Juvenile Status.

Emmanuel Depas, an immigration attorney and president of the Haitian-American Lawyers Association of New York, and a representative of the Brooklyn DA's office clarified the eligibility requirements for family-based citizenship petitions and the U visa, a special visa for immigrants who are victims of certain crimes.

Several speakers also warned the audience that the rights of immigrants of color are particularly at risk under Trump.

"They start with the Muslims and then they add to the list," Perry, who is originally from Jamaica, told the crowd. "You have to remember and pay attention to the fact that this is driven not just by religious bias, but also racism."

Reflecting this anxiety, audience members asked questions about deportation, including whether children who are U.S. citizens are at risk of being deported if their parents are deported, and what to do if Immigration and Customs Enforcement agents attempt to detain your neighbor.

Williams told Gothamist he was pleased with the turnout at the event and hopes to engage the same community members in activism against the Trump administration in the coming months. He told the audience he wants to see "the melanin get a little darker" at rallies and marches across the city.

"The Caribbean immigrants have notoriously been difficult to get engaged in this conversation," Williams, whose parents immigranted from Grenada, told Gothamist. "We put a lot of effort in that community because they have the tendency to stay in the background, which, in this moment in time, is dangerous."