In the aftermath of this weekend’s chaotic, deadly Unite the Right rally in Charlottesville, Virginia, several commentators have identified the event as the largest gathering of American White Nationalists and neo-Nazis in decades. But as Jelani Cobb and others have pointed out, the event was “not the first time this country has witnessed the mass mobilization of Nazis.” From George Lincoln Rockwell’s American Nazi Party to the attempted neo-Nazi march in Skokie, the vision put forth by Hitler has survived in pockets across the United States long after the Third Reich crumbled.

The largest and best-funded of the American Nazi groups, according to most historians, was the German American Bund. Founded in Buffalo, New York in 1936, the group existed to promote the German Nazi party among Americans, and was led by German-born American citizen Fritz Kuhn. The Bund was the ideological successor of Friends of New Germany, and within a few years of its founding the group boasted 25,000 members, with as many as 20 youth training camps across the country.

In February of 1939, the group hosted it’s largest ever rally at Madison Square Garden, bringing upwards of 20,000 Nazi-supporting Americans into the heart of Manhattan, where they were greeted by some 100,000 angry New Yorkers. According to Arnie Bernstein, historian and author of Swastika Nation: Fritz Kuhn and the Rise and Fall of the German-American Bund, that confrontation was a defining moment for the emerging fascist and anti-fascist movements in the United States.

As someone who's studied Nazism in America for years, what was your reaction to this weekend’s events? I’m not surprised. I’m really not. I’ve been telling people for years that we are ignoring this movement at our own peril. I don’t see a much of a difference, quite frankly, between the Bund and these groups, in their public presence. The Bund had their storefronts in New York, Chicago, Detroit, Los Angeles—today’s groups are also hanging out in the public space, but in this case it’s on the internet and anyone can access it.

Several people have called attention to the Bund’s 1939 gathering in Madison Square Garden as a sort of historical parallel to what happened in Charlottesville. Can you talk about the reaction among New Yorkers after 20,000 Nazis descended on the city? It was loudly condemned all across the board. In New York alone, [Mayor] LaGuardia and [Manhattan District Attorney] Thomas Dewey reacted very swiftly to the Madison Square Garden rally. It had been building for awhile and was—as I think what happened over the weekend was—a major flashpoint. So leading up to the rally, people from all stripes were prepared to greet them.

It was New York, so the people who showed up outside Madison Square Garden were really an amalgamation. You had leftist groups, housewives, businessmen, college students, fraternal organizations, African-American groups, and, obviously, Jewish groups. Anyone you could possibly imagine was there to protest this, and cops gave them what was a termed a “free speech zone,” where people protesting could go and talk. They were trying to alleviate the situation, relieve some of the pressure that was going to happen.

One of the funnier stories in the book is that there was this loud yelling, someone demanding that the Nazis stop, but cops couldn’t figure out where this was coming from. It was really loud. Eventually the cops centralized where it was coming from: a rooming house not far from Madison Square Garden. They bust into the room and there was a record player, playing the message over and over. Apparently two guys had made a record, rented the room, set up the record with a loudspeaker, and left it running.

Was there violence between the protesters and Nazis? There were some fights, but not to the extent that we saw this weekend in Virginia. The police were very prepared. One of them famously said, "We have enough men to stop a revolution." Close to 100,000 protesters turned up. It was the biggest police presence in New York City history, only eclipsed by 9/11.

Nothing on the Charlottesville police, but they just don’t have the resources that the New York Police Department does, and that's part of the reason, I think, for what happened. There's also a huge difference in that these people are much more violent.

You’re saying that the white supremacists in Charlottesville were more violent than the American Nazis of the 1930s? Oh yeah. The Bund, for all their stupidity, did not get into fights to the extent that we saw in Charlottesville. I mean they got into fights sometimes, but there were reports in Charlottesville of these guys walking around with automatic guns, in camouflage with their swastikas, smelling like alcohol. I'm flabbergasted that something even worse didn't happen. That it was just one person killed is miraculous, quite frankly. 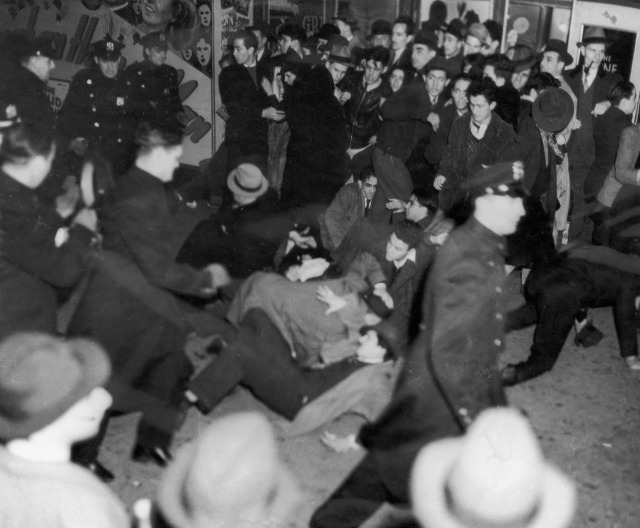 When fights between the Bund and the anti-fascist groups did happen—either before or after this rally—what did that look like? A good example is when Jewish American war veterans snuck into one of the Bund’s rallies at the Yorkville Casino, a gathering hall for German Americans. They went in, and when the speeches hit their high point, they stood up and put on their Jewish American war veteran caps and started swinging. People had no problem doing that.

One of the other interesting groups to go after [the Nazis] was the boys of the Jewish mafia. Jewish mobsters like Meyer Lansky, Bugsy Siegal, and Mickey Cohen were approached by high-up figures in the Jewish community, according to Meyer Lansky, and asked to put an army together. Normally they wouldn’t accept civilians into the mafia, obviously, but they had so many volunteers that they had to run training camps on how to beat up the Nazis. The mafia doesn't talk much, but they were very proud of what they did. They were offered payment, and they said no, we want to do this for our people. And yes they were bad guys, but they were our bad guys. In my book I compared it to the day of atonement, that maybe this was their way of atoning for some of the really terrible things they’d done.

Another really important figure here is Walter Winchell, who had a syndicated Broadway column, and wasn't fettered by the standards that other journalists had. So he attacked these guys with all kinds of stuff. Fritz Kuhn hated Walter Winchell, because Winchell just went after him unrelentingly. He was one of the first people to go after the Bund.

What do you say to people who are having a hard time grasping that Nazis could even exist in America in 2017? Like I said, I've been studying these groups. We’ve known that they’re out there. We know that they didn't just go away when the Bund collapsed. The Bund collapsed because their leader Franz Kuhn was basically stopped by LaGuardia, who couldn't get Kuhn on a free speech issue. Instead, he discovered that Kuhn was siphoning Bund funds to pay for his romances, so they got him on embezzlement. But they didn't just go away. Within a few years after World War II, you had George Lincoln Rockwell running the American Nazi party, you had what happened in Skokie, plus the Klan has always been around.

So they've always been out there, and they've always been communicating. We saw hints of it with the Michigan Militia. There have been little pockets of it, but it's been largely ignored, and I've been saying for years that we've been ignoring this at our own peril. And the flashpoint was this weekend, and hopefully, like Madison Square Garden, it will lead to some action.

The difference, though, is that Roosevelt didn’t react to this with winks and nods and coded language. We saw the campaign that Trump ran. We saw a president that did not mention Jews on Holocaust Remembrance Day. He was basically forced into making that speech today. He’s been winking and nodding to this all along.

#bund
#charlottesville
#fritz kuhn
#madison square garden
#nazis
#roosevelt
#trump
#original
Do you know the scoop? Comment below or Send us a Tip