These Pills 'Will Help You Relax': One Of Bill Cosby's Alleged Victims Gives Harrowing Testimony

The sexual assault trial of Bill Cosby is underway, and his accuser will return to the witness stand today to continue cross examination from the entertainer's lawyers. Andrea Constand testified yesterday that Cosby gave her pills and wine before sexually assaulting her, alleging: "I said, ‘What are they, are they natural, are they herbal?'" and she said he told her, "These will help you relax. They are your friends. They will take the edge off."

While Constand had originally come forward in 2005 about the 2004 meeting at Cosby's Pennsylvania home, the Montgomery County district attorney did not seek charges, reportedly due to lack of evidence. In 2016, after an avalanche of sexual assault allegations and details from depositions during Constand's civil suit against Cosby (he settled with her) were released, Montgomery County prosecutors reopened their case against Cosby and arrested him for indecent assault.

On Tuesday, Constand recalled that when she was operations manager for Temple University's women's basketball team, Cosby was an avuncular figure to her: "He was a Temple friend, somebody I trusted as a mentor and somewhat of an older figure to me."

Constand, who was 30 at the time, was at Cosby's Elkins Park home to discuss new professional opportunities. She said after taking the pills, "I told Mr. Cosby that I had trouble seeing him. I could see two of him," and recalled that her "mouth was cottony." From Page Six:

“I was jolted conscious, jolted awake, and I felt Mr. Cosby’s hand groping my breasts, under my shirt,” she recalled. “I felt his hand inside my vagina, moving in and out. And I felt him take my hand, place it on his penis and move it back and forth.”

“Did you ask him to stop?” asked Montgomery County prosecutor Kristen Feden.

“I wasn’t able to,” Constand said. “In my head, I was trying to get my hands to move and my legs to move, and those messages were frozen. They didn’t get there. They were limp and I wasn’t able to get there, to fight, to get away.”

Then, she added, her voice quavering, “I wanted it to stop.”

When she tried to confront him, "He looked at me and said, ‘I thought you had an orgasm, didn’t you?’  I said, ‘I did not, I just want to know what you gave me.’ He said, ‘Wait, wait, wait, wait, wait’ and he wanted to speak to me near where the incident occurred. I realized he was not going to tell me what he gave me that night. I was under the impression it was herbal but he was evasive with me so I left." 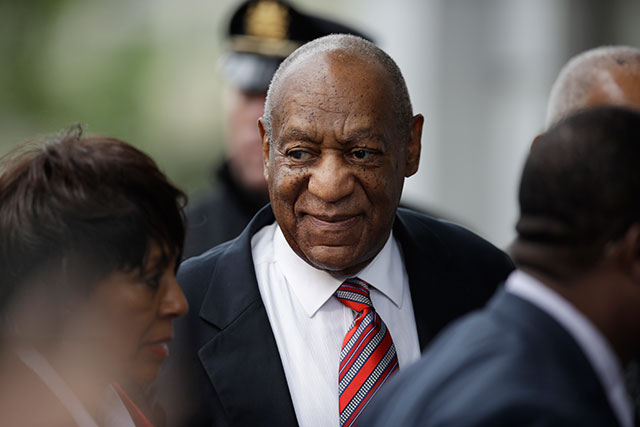 One of Cosby's lawyers, Angela Agrusa, said during the cross-examination, "You were befriending him because he was going to be able to give you some resources to get into broadcasting." Agrusa also questioned Constand's 2004 police account that she did not spend time alone with Cosby before the incident in his home. "[D]efense attorneys have proof, including Constand’s later interviews with police, in which she describes private meals with the entertainer before January 2004 and a visit to his hotel room at a Connecticut casino. The defense also has phone records that show Constand placing more than 50 calls to Cosby in the months after the alleged incident," the Washington Post reports.

Constand replied, "I was very nervous," and "I wasn’t able to recall every particular moment that I had seen Mr. Cosby in order of dates. There was a lot, 16 months, to try to compress." When Argusa pointed out that she contacted Cosby after the incident, she said she did it for her job, "I thought it would look negative on me and being a representative of coach [Dawn] Staley at the university... He was a trustee." From Philly.com:

Asked by Feden, the prosecutor, on Tuesday how she felt seeking a favor from the man who she claims attacked her, Constand blinked back tears.

“It was a very big burden on me, but one that I didn’t have the courage at the time to tell my family about,” she said. “And so, I just went along with it.”

Constand now lives in Canada and is a massage therapist.

Cosby, is now 79 and claims he is blind. He faces three felony charges of aggravated indecent assault. He told a radio station last month that he will not testify, "What people want to say, want you to say, and how they maneuver—yes, I do have lawyers to protect me, 'objections,' 'sustained'—but I just don't want to sit there and have to figure out what I believe is a truthful answer as to whether or not I'm opening a can of something that ... my lawyers are scrambling."

#andrea constand
#bill cosby
#sexual assault
#trial
Do you know the scoop? Comment below or Send us a Tip