No one in New York City has contracted Zika virus locally, but mosquito season is on its way, and the city's health officials are doing everything possible to limit the likelihood of a local outbreak this summer. Accordingly, the Health Department will conduct its first application of larvicides over the next three days, targeting breeding grounds for mosquitos that could carry Zika virus, as well as those that could transmit West Nile virus. This will be limited to marshes and other non-residential zones in Staten Island, Brooklyn, Queens, and the Bronx, and will take place May 12th to May 14th between 6 a.m. and 7 p.m. each day.

The Aedes aegypti mosquito, which has been spreading Zika virus left and right in Latin America and the Caribbean, isn't native to New York City, though depending on how hot it gets this summer, those mosquitos could find our climate to be hospitable, one study suggested. Meanwhile, Aedes albopictus, which is native to New York City, has also been known to transmit Zika virus, as researchers recently confirmed. As part of a three-year, $21 million plan announced last month, the city is increasing its surveillance of these Aedes mosquitos, using many of the same tactics they've used to combat West Nile virus.

As of last week, 62 people in New York City had been infected with Zika virus, but all of them acquired it while abroad. The concern is that with the onslaught of mosquito season, Aedes mosquitos could pick up the virus from a person infected abroad, and then begin transmitting it locally. A recent analysis ranked NYC's airports second only to Miami's in their risk of receiving passengers infected with Zika virus this summer. In most people, the virus is really mild—the main group at risk is people who are pregnant or hoping to become pregnant, as the virus has been linked to birth defects.

The Health Department will be apply larvicide to targeted areas using low-flying helicopters, releasing pellets of Altosid XR-G® or VectoBac® GS, which it says are naturally occurring and environmentally friendly.

Here's where to head if you're looking to kick off your weekend with a nice, invigorating larvicide shower:

In the Bronx: Pelham Bay Park.

And if you're more of a visual learner, the Health Department has made you some maps: 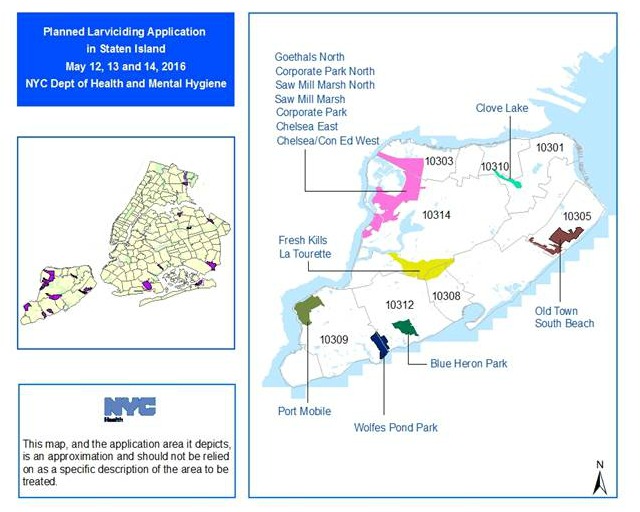 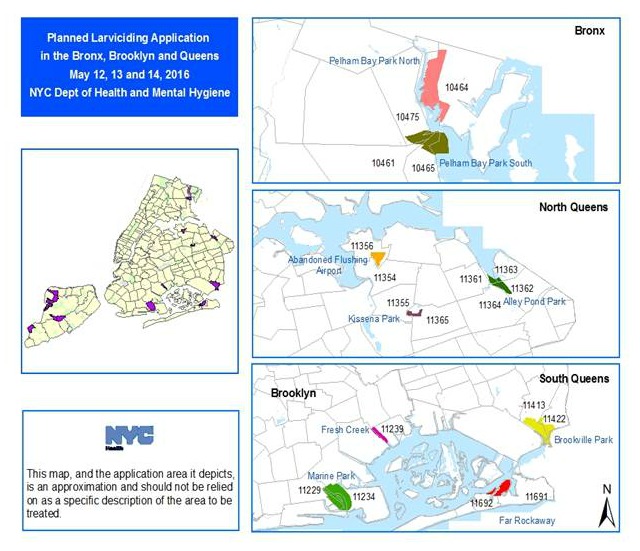