These Buildings Have The Most Broken Elevator Complaints In NYC

On Thursday, a 30-year-old man was killed when he was crushed by a malfunctioning elevator in his apartment building in Kips Bay. It has since come out that tenants around that building, the Manhattan Promenade, had long complained about issues with their elevators—and the city's Department of Buildings had fined it multiple times for unsafe elevator conditions.

New Yorkers might be wondering today whether buildings they frequent have been maintaining their elevators. You can check the Department of Buildings website to look up what sort of complaints and violations have been filed against your building. Below, you'll find a list of buildings with the most broken elevator complaints, the 10 worst offenders, according to 311 data.

"We track every 311 complaint about broken elevators and build predictive models so New Yorkers can know if the apartment they are looking at is likely to have a broken elevator again in the future” says Nir Gonen, a data scientist at Localize.city, who compiled the list. 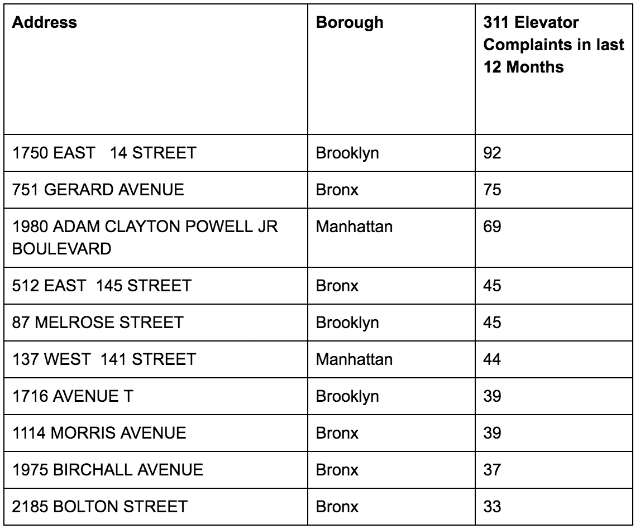 Despite being cited for poor elevator maintenance in the Manhattan Promenade—and the fact the DOB ordered the building to stop using its other elevator until it was fixed—The Real Deal reports that ATA Enterprises, which manages the Manhattan Promenade building, actually did conduct an "exhaustive review of all the elevator’s safety systems, including the brakes" on August 2nd, with inspectors saying the car was safe to operate. TRD adds though that this elevator did not have a rope gripper, which prevents an elevator car from falling in the event its brakes fail—the device is required in elevators in buildings constructed after 2008, but the Manhattan Promenade was built in 1997.

But as TRD reported earlier this year, these mechanics often don't have enough training, inspectors regularly fail to identify hazards, and landlords escape penalties more often than not in these situations.

Mike Halpin, the national coordinator with the Elevator Industry Work Preservation Fund, told Gothamist that these kinds of issues are exactly why his group has been pushing New York state to pass the Elevator Safety Act—which would set minimum education and training standards for elevator mechanics, and also create an Elevator Contractors License and an Elevator Safety and Standards Board. The legislation was passed by both houses of the New York State Legislature but has yet to be signed by Gov. Andrew Cuomo.

"I'm not sure when it might happen, but the administration is actively engaged on it," he said. "They are figuring out the nuts and bolts of how it'll be administered when it's in place."

He explained how having such legislation could help prevent the next elevator tragedy: "The reason the legislation is so important is because primarily it'll give elevator mechanics a little more skin in the game, which will make them more aware and sensitive to issues." Last year, an audit by state comptroller Thomas DiNapoli found that outside contracted companies often cut corners when it comes to these kinds of inspections.

Halpin described how elevator mechanics can often come under pressure from supers and landlords to put off taking cars out of service because of "marginal" problems with elevators.

"Supers may lean on mechanics, and these guys don't have the protection of a license, the power that gives him, so he may succumb to pressures," Halpin said. "Building managers don't want to hear that their cars are going out of service. So this bill will give them more power in the game to stand on safety issues."

Bruce Kaye, an attorney for Barasch McGarry Salzman & Penson who has experience working on cases against privately owned and operated elevator operation systems, told Gothamist that owners, management companies and elevator maintenance companies are all responsible for taking tenants' complaints seriously and maintaining equipment. "A jury is always asked to look at whether the elevator maintenance company negligently performed its duty of maintenance, or whether the owner or management company failed in some way to bring these problems to the attention of the elevator company," he said.

"This is not rocket science here," he added. "Prior complaints by tenants to the owner or management company have to be passed on to the elevator maintenance company. So that's one issue. When tenants complained, what did the owner and management company do to make it safe?"

As for what you should look out for on a daily basis, Halpin advises people to check whether the car is level with the floor, whether the door is opening and closing properly, and whether the ride is smooth, both in terms of acceleration and de-acceleration. If you have concerns, you should report it to your building management. If those concerns go unheeded, you can file a 311 complaint with the city here. And you can learn more information about elevator safety here.

One thing everyone agrees on: elevator deaths should not be happening in 2019. "Most elevator passenger fatalities are preventable," Halpin said. "Legislation [like Elevator Safety Act] will go a long way to helping us prevent them."

#311
#department of buildings
#elevator
#elevator complaints
#Samuel waisbren
#original
Do you know the scoop? Comment below or Send us a Tip