There's No Tarantula In Park Slope, But This Mutant Shark Might Eat You

Good news, Park Slope denizens: it turns out that the lost pregnant Mexican Red Rump tarantula roaming your streets and threatening to steal all the stroller parking spots was a hoax. But new terrors abound—a tipster spotted this poster on a pole near Prospect Park yesterday: 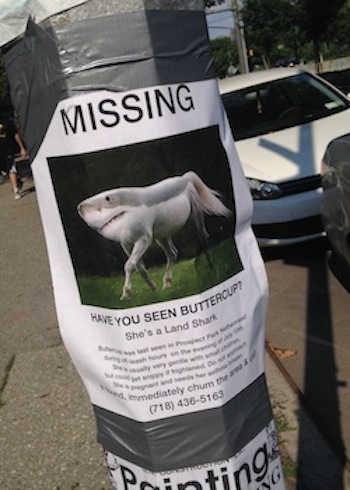 There's no way that baby's fake [DISCLAIMER: This poster is probably fake]—save Buttercup before she has an asthma attack!

As for Penelope the Pregnant Spider Monster, The Times did a little digging and discovered that the South Slope missing poster declaring her lost was the work of one local resident who posted it as a joke. “I never expected it to blow up,” he told the paper. “Then I was in the train station, looking at my Twitter feed and saw this tweet from ABC about a tarantula. I thought, ‘Oh, man.’"

We can't have anything fun anymore.

#brooklyn
#park slope
#penelope
#south slope
#spider
#tarantula
Do you know the scoop? Comment below or Send us a Tip