Governor Andrew Cuomo is squarely in charge of the MTA. He's the official best equipped to prioritize crucial repair work, and establish new funding streams to chip away at the authority's staggering $38-billion-and-growing debt. But politicians in New York City—mayors and would-be mayors, council members and their 2017 challengers—are not powerless, a coalition of transportation advocates argued Thursday.

The Riders Alliance, Regional Plan Association, Transportation Alternatives and others gathered outside the City Hall R subway station to present policy guidelines they believe could improve affordable transit by bus, subway, bike and foot without intervention or assistance from Albany. The focus is on tested ideas over flashy ones: more protected bike lanes, more select bus service, more money for the MTA's capital and operating funds. Advocates also called on Mayor de Blasio to fund half-price MetroCards for New Yorkers living in poverty, estimated to cost $212 million per year. Last month, de Blasio dismissed a $50 million pilot as cost-prohibitive, despite endorsement from a majority of the City Council.

"There is no doubt that with the crisis facing our subways today, Governor Cuomo needs to take charge and find the plan and funding necessary," Riders Alliance Director John Raskin said. "But that doesn't mean there's nothing the city can do."

New York City could also leverage some of the land value generated when City Hall votes to rezone a neighborhood, advocates said. These controversial up-zonings have been met with pushback from East New York to East Harlem. One positive example, according to the Riders Alliance, is a $220 million Grand Central Terminal renovation in exchange for special zoning to accommodate a planned 63-story office tower One Vanderbilt in Midtown East. The developer was granted air rights in exchange for a major public transit renovation.

Elena Conte, policy director at the Pratt Center for Community Development, insisted that from her organization's perspective, this is by no means an endorsement of all rezonings. Instead, she said, mandatory improvements like new bus lines and protected bike lanes should be "linked and tied" to neighborhood rezonings in neighborhoods like Long Island City and Downtown Brooklyn, which bring thousands of new residents to already-strained transit options. This way, she said, residents will have another bargaining chip.

City Hall did not immediately comment on the funding proposals.

Advocates say they are planning to send a copy of the policy priorities to every declared candidate for city office in 2017, including borough presidents and district attorneys. Other priorities include reduced fares for NYC commuters who live along the Long Island Railroad and MetroNorth (an MTA-spearheaded pilot is in the works this year), and the controversial Move New York plan that would impose tolls on some NYC drivers (de Blasio recently said the plan is "not part of my vision.")

The groups call for the expansion of CitiBike to the outer boroughs with deeper discounts, possibly with city funding, and applaud de Blasio's commitment to double the number of bike lanes in NYC by 2020. Transportation Alternatives in particular calls for additional Vision Zero funding, taking into account federal uncertainty, as well as NYPD enforcement of the Right of Way Law. 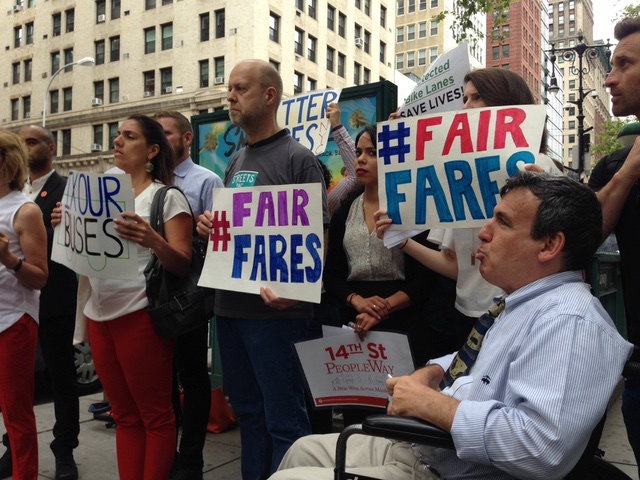 There is no mention in the plan of the Brooklyn Queens Connector, a controversial multi-billion streetcar project that Mayor de Blasio championed in his 2016 State of the City address. The plan has the endorsement of some city planners and multiple real estate developers, but has been dismissed by many at the neighborhood level as a so-called "gentrification express," apparently routed to benefit new residential towers on the Queens and Brooklyn waterfront.

During a question-and-answer session on Thursday, we asked the coalition twice to explain why the BQX is excluded from their 2017 action plan. Do the groups endorse the project? Denounce it? Deem it unworthy of discussion? At least Transportation Alternatives and the RPA have backed the streetcar.

"It's not in the comprehensive agenda that all of our groups can agree on together," Riders Alliance Director John Raskin said. "And this is really a consensus document."

A spokeswoman for City Council Speaker Melissa Mark-Viverito did not immediately comment on the proposals.