There Will Soon Be Zero Bookstores In The Bronx

Come January 2017, the Bronx, a borough with a population roughly equal to San Antonio, will not have a single general-interest bookstore. That is the reality its 1.45 million people are facing after the announcement in mid-October that Barnes and Noble will not renew the lease at its Bay Plaza Shopping Center location, which was the only regular bookstore left in the Bronx. That Bay Plaza site will become a Saks Off 5th.

The news of the closing set off a public outcry, which included an impassioned letter from eight-year-old twins, a eulogy in the New Yorker and a petition drive from State Assembly Member Michael Benedetto.

Bronx Borough President Ruben Diaz did announce this week that he's secured a commitment from Barnes and Noble to open a new Bronx location, but with the company closing stores all over the country, the prospects of that plan becoming reality seem murky. Even if it does materialize, the store could be months or years away.

It might be odd to think of a corporate chain located in a shopping plaza as a beloved community member, but that's what the Barnes and Noble is to Bronxites like Carmen Sanchez. On Wednesday morning, Sanchez, a 49-year-old paraprofessional at the New York Institute for Special Education, was chaperoning six children with autism to the bookstore, where a staff member read them a picture book.

"When I heard they were closing, I said, "'Why?'" Sanchez said. "The community needs this."

New York City has around 840 bookstores. So while the closing of a Barnes and Noble in the age of Amazon is hardly a surprise, the question has to be asked: Why are there no bookstores in the Bronx?

The last independent bookstore in the Bronx, a hole-in-the-wall called Books in the Hood, closed in 2011 after four years in business. The last Bronx bookstore with real staying power was Paperbacks Plus in Riverdale, a mainstay for almost four decades until it closed in 2008. But in the past half century, the Bronx has never been home to many bookstores.

"I never went to bookstores in the Bronx until I finished high school," said Bronx native Ron Kavanaugh, 54, founder of the Literary Freedom Project and manager of the Bronx Book Fair, which started in 2013. "I couldn't rattle off five names of bookstores that have been in the Bronx in my lifetime."

"I think in the end it really and truly is about pricing. It's not a Bronx issue, it's a New York City issue," said Marlene Cintron, president of the Bronx Overall Economic Development Corporation. "There have been other bookstores that have been closed in Manhattan and Queens and other boroughs." 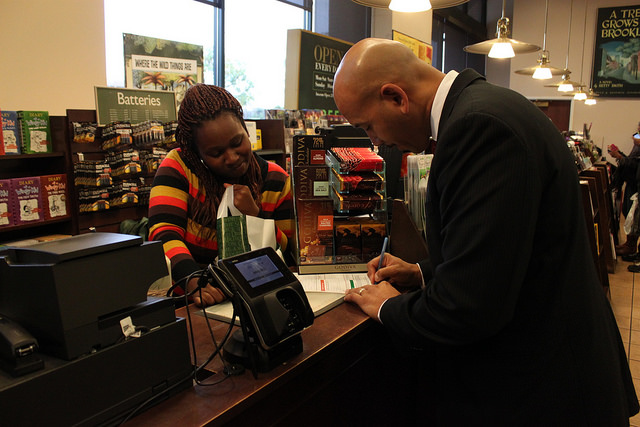 The other four boroughs, however, still have bookstores. They also have more money —the Bronx is the city's poorest borough, and it's not just bookstores that are hard to come by.

"It can be a challenge to find things in the Bronx that aren't clothing stores and aren't restaurants," said Amelia Zanio, 26, an environmental educator and historian who started a petition to save the Bay Plaza Barnes and Noble location after the company's 2014 announcement it would not renew the store's lease. That petition resulted in local politicians securing another two-year lease for the store, which is now coming to an end. "The bookstores we do have in the Bronx are religious, or on college campuses, which of course are blocked off from the general public."

Without access to a bookstore, Bronxites are increasingly using the borough's public libraries. Between 2002 and 2014, checkouts of library items rose 35 percent in the Bronx and Manhattan, while checkouts in Queens and Staten Island fell, according to a report by the Center for an Urban Future. So while bookstores may be struggling, it's not because Bronx residents aren't reading.

Libraries are an essential resource to ensure people have access to books, but according to New York University professor and child literacy expert Susan Neuman, they are often not enough to encourage a culture of reading. Seeing a book in a bookstore can give a child a sense that it is valuable and something worth paying for.

"For a sizable number of children in the Bronx, there exists whole areas where you can just not find a book," said Neuman, who authored a recent paper on "book deserts." Neuman and her research team found that in many low-income neighborhoods in major cities, places that you would expect to find books, like pharmacies or toy stores, don't carry them. "Even if you want to read to children, you can't do it." Other reading materials were also few and far between.

This adds to the achievement gap between rich and poor students, particularly students of color. "The way you get smart is reading," Neuman said.

While the Bronx might not have a general-interest bookstore by next year, several Bronxites are imagining new ways to provide books to residents. Author and playwright Calvin Ramsey plans to install a series of six outdoor structures he calls "book houses" throughout the Bronx in the spring. Children will be able to take and exchange books without filling out any paperwork.

"I think the books you get at the library are wonderful," said Ramsey. "But it's good for kids to have books in their home that they can own. They can have a little bookshelf. A library inside your house is always a good thing."

But the best hope for an independent bookstore in the Bronx is probably Noelle Santos, a Bronx native and literary entrepreneur.

Santos, 29, wants to launch a bookstore with an event space and a wine bar that would support local authors. In September, her idea, which she is calling The Lit. Bar, won a $7,500 second place prize at the NYPL's 2016 StartUP! business plan competition. She's currently looking at locations in Motts Haven and Hunts Point. While the death of the Bay Plaza Barnes and Noble would leave her store without any competition in the borough, Santos is distraught that it is closing.

"Even if we had three bookstores in the North Bronx, we'd still be grossly underserved," Santos said. "It's a huge loss. It's really heartbreaking."