A group of artists and activists is planning a Saturday exorcism of the AT&T Building in Tribeca where, according to reporting by The Intercept, the National Security Agency likely controls several floors and surveils communications around the globe.

"In an ultimate act of hubris, the government has attempted to make an omniscient force, a false god—we must cast out this idol," organizers wrote in a communique section titled "Why Are We Exorcising?" 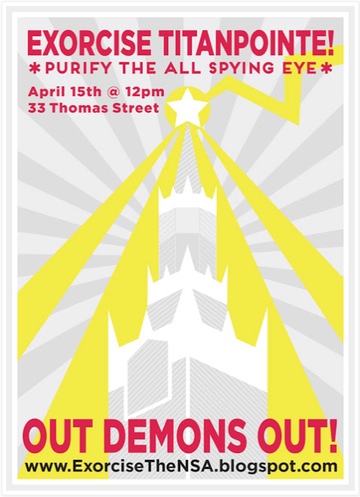 In 2016, The Intercept revealed documents showing that the former AT&T Long Lines Building, a brutalist skyscraper built in 1974, is probably home to a top-secret NSA surveillance operation called TITANPOINTE. The documents don't explicitly out the building at 33 Thomas Street, but in aggregate, they strongly point to the 29-story tower as the place where the wires are tapp-ed.

A 2011 travel guide for NSA employees shows that those visiting TITANPOINTE should first go to the FBI's New York field office, a little over a block away. Another guide from 2013 says that a "partner" called LITHIUM, code for AT&T, supervises the site. Employees are also instructed to ring a buzzer, sign in, and wait for someone to meet them. The Intercept wrote that 33 Thomas Street has a buzzer outside, a sign-in sheet in the lobby, and a 24-hour guard.

The site reported further that the building houses an international gateway switch, routing calls between the U.S. and other countries. Documents leaked by Edward Snowden in 2013 refer to a surveillance program called BLARNEY, which was established in the 1970s, the same decade that the NSA was called out for surveilling anti-Vietnam War activists, civil rights activists including Martin Luther King, and at least two journalists. According to the documents, BLARNEY leverages "commercial partnerships" in order to conduct bulk collection of data and metadata.

The exorcism is being organized by editors of The Quiet American.

The event was inspired by the attempted levitation of the Pentagon by Abbie Hoffman, Allen Ginsberg, and an assortment of other freaks from the East Village and elsewhere during the massive 1967 march on the war building.

That levitation, like a more recent attempt to levitate Vice's Williamsburg headquarters into the East River, was ultimately unsuccessful.

The exorcism is set for Saturday at noon, and according to the organizers will include "a cadre of priests, supplicants and a volunteer choir" to "exorcise the malevolent energy and information coursing through the AT&T monolith."

The NSA did not immediately respond to a request for comment.

We wanted to learn more about the thinking behind the esoteric street action, so we spoke to Noah Harley, a translator, musician, and Quiet American editor living in Ridgewood.

How did you get the idea to do an exorcism? The idea came from reading that article in The Intercept. Eli Smith and I read it around the same time, and we were talking, and one of us said, "I want to just exorcise that building." You've seen the building?

Before I knew what it was, I took a photo of it because it's so creepy. It’s so creepy. It just needs to be exorcised. It has no windows. It just sucks up information, and it's this black hole vortex that all light disappears into. It's begging for some kind of energetic realignment.

An important part of it is to raise awareness about AT&T’s collaboration with the NSA, and issues around internet privacy, and civilian privacy. But also we wanted to hit it from a slightly less political with a capital "P" angle. 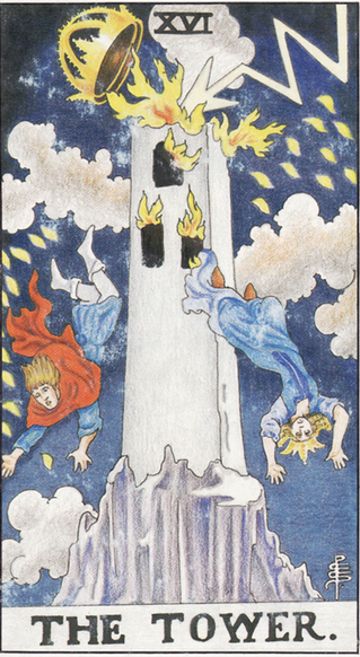 (Tarot-The Royal Road)
What makes the people involved qualified to perform an exorcism?

What is it? From their fruits shall you know their labors? [Editor's note: Not quite.] It has to do with intention and preparation. We've been working on it for a month, and really thinking about the script, and what the rituals that we're going to do are. So I guess it's our willpower and focus that qualify us.

I heard there's going to be tinfoil hats. Yeah, the tinfoil hats are to protect us from whatever they're trying to get from within us, but also tinfoil hats are just great visually. We've been hard at work making a series of protective headgear for ourselves. It's got a kind of stormtrooper-Egyptian vibe to it. And then the hats are paired with some mylar chest protection gear, also to protect the heart, and they have silver tassels coming over them. There's also a Roman gladiator look to it.

Sounds like you're hitting all the high points of costume history. How many people do you expect to come out? We have no idea. We're hoping at the minimum for about 50 people. If it's smaller, we'll counter size with ferocity.

Who's in the choir? There's going to be a series of led group chants, so anyone who comes, we're hoping that they'll participate. There's a core group of about 12 or 13 core exorcisers. They're going to be doing a number of different things. [Puppeteer and mutual friend Sam Wilson] has been working on a piece about the mythical origins of TITANPOINTE via the story of Perseus.

There's also going to be a short processional from Foley Square leading up to the exorcism rite. We've built a number of high-frequency sound devices, mostly made from PVC pipe, and a bunch of drums. There's gonna be several hurdy-gurdies to issue some low noises, and the PVC pipes are kind of cottage-industry didgeridoos.

What do you hope passersby will get out of this? I hope that they enjoy the spectacle on a beautiful spring day. I hope they’re curious about it and take one of our leaflets. I hope that they stick around and don’t just take pictures but also chant a little bit. Part of this is also acknowledging the very real fear that this sort of thing creates within us individually. It’s like an exorcism in stereo, because not only are we trying to exorcise the data, purge the data from the building, but we’re also trying to exorcise ourselves of the fear and the concern, and the ghost in the machine, the nagging awareness of constant surveillance or potential constant surveillance. It's also a ceremony for ourselves. That’s why we hope people passing by will get something out of it. It's their issue too.

Can you tell me about The Quiet American? We're trying to do it three times a year. It's sort of on an ad hoc basis. We started it originally to get free admission to museums, before the NYC ID card because it was easier to get into shows and museums with a press pass, a little card that we made and then laminated.

I work with three other people on it. and the two issues we’ve done to date have been pretty different. The last one we went to the Republican National Convention and sent out daily reports on the boring chaos. The we did a 36-page black and white newspaper with a bunch of pieces about the convention and a bunch of photo portraits that the photographer Horatio Baltz shot.

I saw on your website that you all live in Ridgewood—many of the people involved in the 1967 Pentagon levitation lived in the East Village. Do you think the center of weirdo energy has migrated? Ridgewood has some freaky stuff going on. To be honest with you, New York is a very different city than it was in the '60s, and I think that weirdo energy was allowed to coalesce in a way that is more difficult to do now because of rent, because people have to work three jobs to make it happen. It’s harder to get that critical weirdo mass going. It’s also just relationships. The Quiet American started because we all lived five blocks from each other and we could meet up and just riff on stuff for a couple hours. Eventually we were like, “Oh, we should make a newspaper.”

Nothing beats physical proximity, still. Nothing beats being able to see people and run into them incidentally, as opposed to planning things two weeks in advance, which is the New York way.

I don’t think the guys in the East Village, maybe they had a consciousness that they were at the center. I think more they were just doing their thing together.

I reached out to the NSA press office about this, and they didn't get back to me. Do you think they have anything to hide? [Laughing] Maybe they do. That's been a running part of this, is that for the first time really I have started to be aware that an email that I send could be read by other people. I’m also learning a lot doing this. It’s changing my thinking. Part of the difficult thing about this surveillance stuff is that we don’t know, we don’t have control over it. You don’t know what’s paranoid and what’s common-sense.

We’ve been a little bit careful when we’re talking about what we’re doing, keeping it person-to-person. That's the first time I've gone through something like that. At the NSA, it’s their business to hide things.

The building itself says so much about why we’re doing it. It was built to withstand a nuclear attack. The whole building is constructed out of fear. It’s like an altar to hysteria. It’s this silent altar to this thing that we can’t control. The whole thing is saying, “You need me because the world is uncertain and scary.”

Anything else you'd like to mention? Just that this is an issue that affects everybody, and that deep within the reader of this article’s ancestral memory is the knowledge of how to conduct a ritual exorcism, and if they come, then they will see that ancient memory be resurrected.