'There Is No Planet B': Thousands March For Science In NYC A week after the Tax Day March, thousands of people flooded streets across the country for the March for Science. One of the chants was heard in multiple cities, including New York City, "What do we want? SCIENCE! When do we want it? AFTER PEER REVIEW!"

The Earth Day marches were an opportunity for people to stand up during a time when many feel that the Trump administration is attacking science, through his appointments and position on climate change. In Manhattan, demonstrators filled Central Park West with signs mentioning "There Is No Planet B" and referring to the Lorax—or Rick and Morty or Neil deGrasse Tyson. 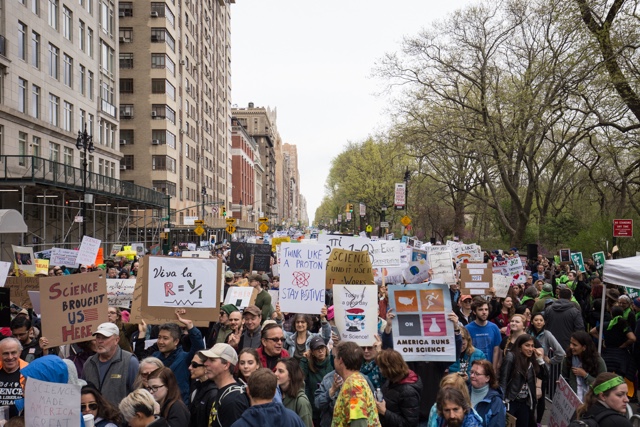 Photographer Sai Mokhtari noted there were many "'brain' knit hat and maybe an equal number of pussy hats" and "lots of lab coats." Two girls' costumes struck her in particular; Mokhtari said they "were dressed as giant styrofoam monsters. They sourced all of the styrofoam for their costumes from NYC public school lunches."

Rockefeller University professor Erich Jarvis told CBS News in D.C., "When the first time in recorded history scientists have to get together to form a march in support of science, something serious is going on." Jarvis also spoke at the rally in the capitol:

Was asked by some to post my @ScienceMarchDC speech. Since I did not get to finish, here is the entire text. #MarchForScience pic.twitter.com/cNBimD0e2F

In spite of the rain, protesters were in good spirits as they marched towards Midtown, booing when they passed the Trump International Hotel at Columbus Circle, and then enjoying drumming from Batala NYC near Times Square.

In a statement yesterday, President Trump said, "Rigorous science is critical to my administration's efforts to achieve the twin goals of economic growth and environmental protection." He did not mention climate change.