The True Story Behind 'Crown Heights:' How An Amateur Detective Set His Best Friend Free

In the spring of 1980, Colin Warner was snatched off the streets of Brooklyn and sentenced to life in prison for a murder he knew nothing about. He was 18-years-old at the time, a poetry-loving Trinidadian immigrant sporting dreadlocked hair and combat fatigues. Then one night, for reasons Warner still doesn't fully understand, police arrived at his Crown Heights home, handcuffed him for the murder a man named Mario Hamilton, and stuck him on a bus to Rikers Island.

The failure of justice that followed would keep an innocent man in a New York jail cell for 21 years — four of them spent in solitary confinement.

But Warner was not entirely alone. His childhood best friend, a man named Carl King, would remain fanatically devoted to his cause for more than two decades. Throughout those years, King raised money for a string of failed appeals, and taught himself to do the detective work that the NYPD never got around to. In 2001, the state recognized their error and freed Colin Warner from prison, thanks in large part to King's amateur investigation.

"This is the dark reality of America that no one wants to talk about. They will deny you the privilege to exercise certain rights because of your skin color, because they see you just as a number"

The story of Warner's wrongful incarceration and eventual redemption is the subject of Crown Heights, a new film starring Keith Stanfield and Nnamdi Asomugha. The Sundance award-winning drama, based on a 2005 episode of This American Life, premiers in theaters on Friday, and Warner, who lives in Georgia with his wife and daughter, is in town for a week of screenings. But he can't sit through the movie, he tells me, because it's still too painful.

"To this day it's unbelievable to me that I went through what I did and somehow survived," Warner says. We're sitting in the living room of Carl King's Crown Heights home, a limestone building just off Nostrand Avenue, around the corner from where Warner lived before the night of his arrest. It's the Sunday night after Charlottesville, and the two men and their families are lounging quietly as an episode of Bob's Burgers plays in the background.

"But it's also very believable, because this is the dark reality of America that no one wants to talk about," Warner adds. "They will deny you the privilege to exercise certain rights because of your skin color, because they see you just as a number."

They, in this case, can be applied widely: The NYPD detective who spent hours pressuring a child witness into identifying Warner as the perpetrator, even as community members told police that they had the wrong guy; the Brooklyn DA who pressed for a conviction despite there being no forensic evidence, no weapon, and a single witness with a track record of lying to grand juries; the hapless judge, mostly white jury, vindictive parole board, or abusive prison guards.

"We talk about the system, but where do you start even?" Warner asks. 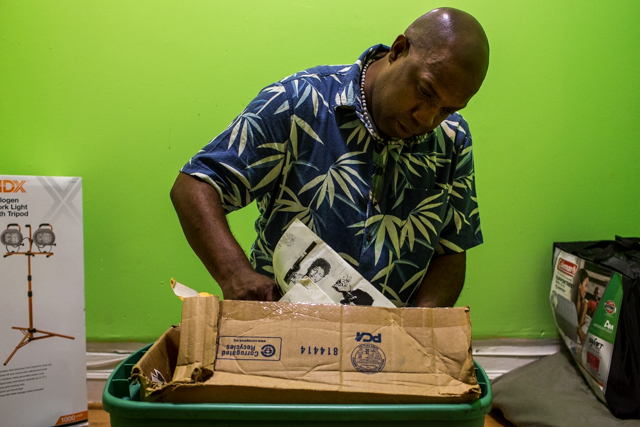 Sixteen years after his release, Warner says he's still coming to terms with his sentence, and he is understandably reluctant to rehash the details of his two-decades long nightmare. Instead, he talks about "the consciousness of America" and the teachings of Marcus Garvey. He says the streets of New York still make him uncomfortable — they're way dirtier than the ones he dreamt of in prison — and he much prefers his rural community in Georgia. He points at Carl King, sitting in a corner sifting through an overflowing crate of arrest records, and calls him "the first and only human being I've ever met of his caliber."

The two first met in Trinidad at the age of five, then reconnected as neighbors in Crown Heights. When King heard the news about Warner's arrest, the 17-year-old took it upon himself to raise funds from the community for his friend's jail support. After Warner was found guilty, King spent years working with court-appointed attorneys and private investigators, some of whom put forth a half-hearted effort, then took off with King's money (he estimates donating about $40,000 in total). Still, he remained relentlessly committed to proving his friend's innocence, and even took a job as a process server so that he could get a closer look at the legal system.

Then in 2000, two decades after Warner's arrest, King met an attorney named William Robedee while distributing business cards outside a downtown Brooklyn courthouse. King offered to do process serving for free, in exchange for Robedee looking at Warner's case.

Together, the two decided that, instead of focusing on the trial's technicalities, as past appeals did, they'd just investigate the twenty-year-old case themselves. So King tracked down witnesses never called by the defense, most of whom were teenagers at the time of the murder. He also managed to convince the actual murderer — a man named Norman Simmonds, who was convicted alongside Warner and paroled after nine years — to admit he acted alone. Thanks to the testimony of the two witnesses, and the admission by Simmonds, the Kings County District Attorney's Office agreed not to oppose Warner's release. On February 1st, 2001, Colin Warner became a free man.

"It was a dream, like being a child again and walking onto a new planet," he says. "You have to learn everything again." 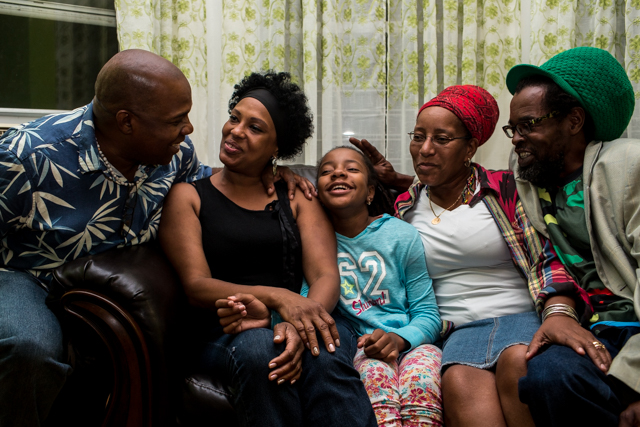 Where Warner is stoic and hesitant to name names, King is more precise with his blame. He mentions the 15-year-old witness whose inexplicable lie spiraled out of control, and the female juror who claimed she was "doing this to get back at the animals." The bulk of his frustration is reserved for the NYPD, specifically Detective Joel Wasser. Wasser, he says, intimidated witnesses, and "didn't care who he was putting in prison."

"These guys sometimes will continue on the job with no repercussions," he says. "There's no accountability for the people who fall through the cracks."

According to a University of Michigan study, 2.3 to 5 percent of the incarcerated population — between 51,000 and 111,000 people — has been wrongfully convicted. "There's really no good way to know for sure," says Paul Cates, the communications director for the Innocence Project. "Once somebody is convicted, the system is really set up for finality. It requires an extraordinary amount of effort to overturn a wrongful conviction." 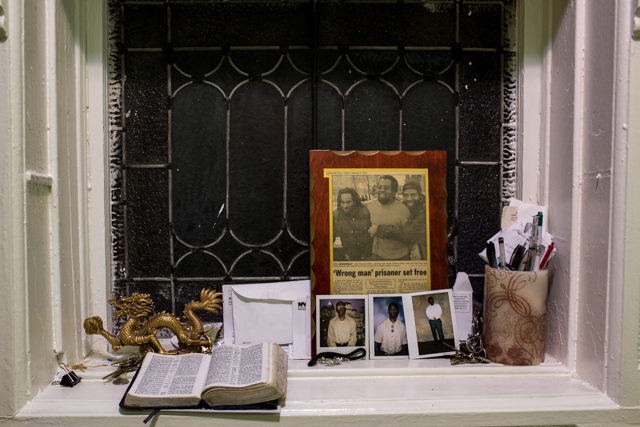 On a windowsill in his Crown Heights home, King keeps the photos of three men he believes are serving sentences for crimes they never committed. Behind polaroids of Valence Coles, Anwar Abdul, and Earl Jackman sits a framed page from the New York Post story on Colin Warner's release. (Scott Heins/Gothamist)

That hasn't stopped King, who lacks a law degree and investigator's license, from trying. After Warner's release, family members of other prisoners reached out to him, asking that he do similar reinvestigations. He is partial to those most vulnerable to the system's institutional failures, and says he only takes on cases when he's confident his clients are innocent. The last two prisoners he worked with were deported —the first to Haiti, the second to Guyana —and so now King is focused entirely on a man named Anwar Abdul, who he's been working to set free for 14 years.

Eagerly, he describes the case: Abdul allegedly murdered Lisa Steinberg, an assistant manager at a Gap store in 1992. He was convicted on the basis of a shoe print — "junk science," according to Paul Cates — in one of the first trials in which such evidence carried major forensic weight. Since the murder happened two years before the introduction of CompStat, the city's statistical system for tracking crime, the case files make no mention of previous robberies at nearby Gap locations that also involved handcuffing managers.

"You have a African American guy with a Muslim name who allegedly killed a young Jewish girl, four months after the Crown Heights riots," King says, his voice rising. "It was a rush to judgement, but it's not unique. This stuff happens all the time."

#Anwar Abdul
#brooklyn
#Carl King
#Colin Warner
#crime
#Crown Heights
#film
#interview
#Rikers Island
#original
Do you know the scoop? Comment below or Send us a Tip
A new Gothamist is coming! We’ve moved comments over to our beta site. Click here to join the conversation and get a preview of our new website.