The Sun Hits Nadir, Burns Out and Sets, Eclipsed by Money Woes 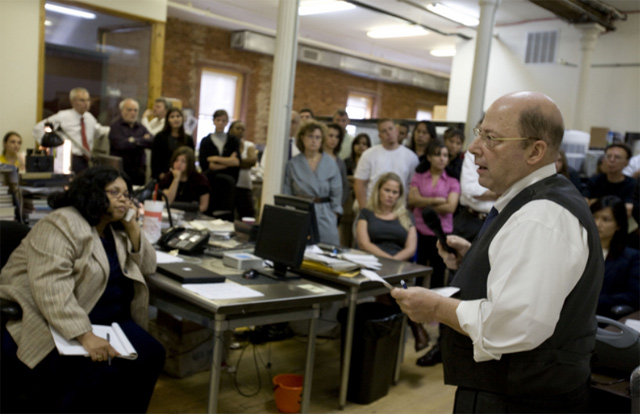 Despite a record-breaking month for advertising revenues, The Sun published its last edition today. Started in 2002, the neoconservative daily lasted just long enough to publish on the first day of Rosh Hashanah, surviving into year 5769 of the Jewish calendar. Editor Seth Lipsky addressed the staff in the paper's Lower Manhattan newsroom yesterday; excerpts from his remarks were published in today's edition:

This was always a risk, and all the greater is the heroism of our financial backers. Even at the end they were offering millions of dollars if we could find the partners we needed. I don't mind saying to you, as I have to them, that I very much regret — I will always regret — that we were not able to return to them the capital that they invested in us.

It is in the nature of things that there are going to be some jeers as we go out, as there were when we came in. Do not be discouraged by this...All of you will be able to tell your children and your grandchildren or simply your friends that not only did you appear in arms in a great newspaper war but that you did so on your own terms, for principles you believed in, and worked with some of the greatest newspaper craftsmen and craftswomen of your generation — and you covered yourselves with distinction.

Lipsky assured the staff that while the paper was folding, The Sun would not file bankruptcy and would pay the 110 full-time employees through November, with their health insurance lasting until the end of the year. An editorial in the final edition charts "the Arc of the Sun," whose name was taken from the old New York Sun that merged with The World-Telegram in 1950. The editorial explains that the 21st century iteration of The Sun was inspired by the former paper's stated opposition "to indecency and rascality, public and private."

The Times had reporters in The Sun's newsroom yesterday and noted that the staff won't miss the working "in a 19th-century building with 19th-century conveniences. They said the paper’s computers and telephones were problem-prone, the fire alarms sometimes sounded for no reason, the elevator stalled regularly and the bathroom plumbing backed up." Elizabeth Green, an education reporter, remarked that readers will remember the paper for its commitment "to having a substantial conversation and holding our leaders accountable."

#business
#bust
#close
#closing
#Final
#folds
#last
#newspaper
#paper
#sets
#the sun
Do you know the scoop? Comment below or Send us a Tip
A new Gothamist is coming! We’ve moved comments over to our beta site. Click here to join the conversation and get a preview of our new website.