The Subtle Ambiguity of Traffic Cones 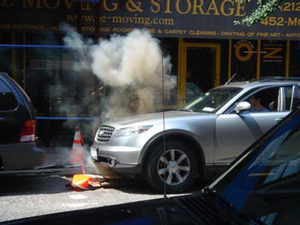 Chris, the proprietor of 78thand2nd, was nice enough to forward us a post with pictures of what may be a serious contender for the dumbest parking job of 2007. This morning, the driver of an Lexus Infiniti decided that the orange traffic cones encircling an open Con Ed manhole on 78th St., with multiple bundled cables running out of it, wasn't a good enough indicator that he shouldn't park there, so he did. And there was an explosion.

Con Ed employees, who'd been working on the street between 1st and 2nd Aves. all morning, were aggressively curious as to why someone would drive over a number of traffic cones connected by a cordoning tape, an open manhole (we're glad no one was down there), and snaking cables. The repeated line of inquiry reportedly went along the lines of "Why the f---k did you do that [park there]?" Notified of his error, the driver of the Lexus was pulling out of the non-space when a second explosion sent a plume of smoke up from beneath his car (pictured).

The Infiniti was driven off before any tickets could be issued or arrests made, but the Fire Dept., Con Ed workers, and neighborhood residents reportedly were all displeased. We suggest visiting 78thand2nd and viewing all the relevant photos regarding this bad parking job. Ponder under what circumstances you'd think it would be a good idea to park in such a spot.