The Stinx of The Bronx 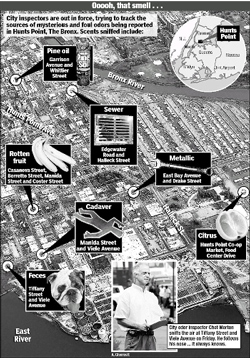 Following complaints that a persistent odor was permeating the Hunts Point neighborhood in the Bronx and nauseating residents, the Department of Environmental Protection hired an outside consulting firm to sniff around the borough and see what it could discover. According to the New York Post, smell inspectors were dispatched throughout the south Bronx with cellphones to take calls directly from residents calling an odor hotline. They discovered that a lot of different things smell very bad all over the borough. The Post identifies the potpourri as bad B.O., or Bronx Odor.

As illustrated by the paper's helpful graphic to the left, some of the scents detected during inspectors' survey were feces, rotten fruit, sewage, and dead body-like. Several facilities could be playing a role in stinking up the Bronx. The Fulton Fish market recently relocated to Hunts Point from lower Manhattan. There are several waste transfer stations in the neighborhood, as well as a company that turns sewage sludge into fertilizer pellets. And the DEP itself runs a sewage treatment plant in the area.

Smell inspectors will be back on the job Monday the 17th, Thursday the 20th, and the following Tuesday the 25th. Bronx residents are encouraged to give them a call at (347) 239-9791 if they notice anything particularly malodorous.

#As
#bronx
#Environmental Protection
#Hunts Point
#manhattan
#new york
#new york post
#News: NYC
#smell
#the post
Do you know the scoop? Comment below or Send us a Tip