Last night at 10:30 p.m., fire trucks and several police cars sat outside a Despers USA steelband group's practice session in Crown Heights. The group is preparing to perform at Brooklyn's Panorama steel band competition, while other steel bands in the neighborhood are gearing up for J'ouvert and West Indian American Day Carnival activities. Kathleen Reilly, who was arrested last year after she allegedly made bogus noise complaints about steel drum music (the Brooklyn DA eventually declined to prosecute), was on the scene, cellphone in hand.

"Every year I've been playing for the band, this lady has always had a problem," said a man who identified himself at Muhammad T. He said that Reilly started making noise complaints at 8 p.m. "She called the police, the police told her to stop calling. She's still calling. She's calling the fire department," said Muhammad.

NYPD and FDNY officials at the scene declined to comment. On Friday, a spokesperson for the NYPD could not immediately find any noise complaints from Reilly in the 77th Precinct. 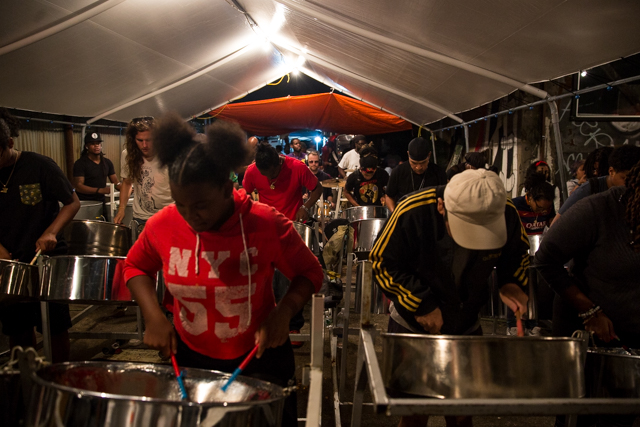 Last year, Despers USA practiced at a space on the corner of Classon Avenue and Pacific Street in Crown Heights, but the practice space has since moved to Dean Street between Franklin and Classon Avenues. Several people outside of the practice session said that it was noise complaints like Reilly's that forced the group to move locations.

Some community members said they were also alarmed by Reilly's insistence on filming these practice sessions. Lisa Richard, whose daughter practices in the band, asked Reilly repeatedly to stop taking photos and videos through a crack in the tarped off chain link fence. Richards said that she told Reilly repeatedly that her daughter was a minor, and asked her to stop filming, but said Reilly ignored her. Richards then showed me a photo she took of Reilly, pointing her cell phone through the opening seam in the chain link fence.

"I like to do photography, so I just photograph whatever is going on in my neighborhood," Reilly told Gothamist last year. "I do it for my personal use. I never know what I photograph until I get home, but sometimes I see something that's strange, I just send it to the authorities." She explained at that time that she was on a mission to curtail rehearsals for Despers USA. "It sounds like the same song. It's extremely loud, and it's not what I want to sit in my house and listen to."

On August 30th of last year, Reilly was arrested outside of Pacific Gardens, which was hosting a party for Trinidadian Independence Day, and charged with obstructing governmental administration, two counts of false reporting an incident, disorderly conduct, and harassment. The Brooklyn DA's office did not say why they later dropped the charges.

Last year Reilly told Gothamist that she lives a few blocks from the venues on Bergen Street, and that she also frequently monitors Berg'n, a food hall and event space on her street near Franklin Avenue.

Reilly declined to speak with Gothamist on Thursday night.

Eventually, Reilly, the FDNY, and NYPD left the scene, and Despers USA continued to practice past 11 p.m.

#311
#carnival
#Crown Heights
#gentrification
#noise complaints
#west indian day parade
Do you know the scoop? Comment below or Send us a Tip
A new Gothamist is coming! We’ve moved comments over to our beta site. Click here to join the conversation and get a preview of our new website.