The Start of Stonewall

The 40th anniversary of the Stonewall Riots (as they have come to be known) is coming up on June 28th, as the city celebrates the LGBT community. Now a website called Out History has published the police records from that historic event, tracing the riots to the initial incident which brought police to the Stonewall Inn. (They also make note of the Village Voice's "Contemptuous Attitude Toward the Gay Community" at the time.)

Seems that a resident of the neighborhood and owner of a 1968 Volkswagen filed a complaint with the Sixth Precinct station house saying her car, which was parked across from the Stonewall Inn at 53 Christopher Street, was “stomped on" at around 2 a.m. on June 28th (full document after the jump). CityRoom notes that this incident happened at the beginning of the uprising, "the six-day series of disturbances that began as a protest by gays against police harassment and became a defining moment in the gay-rights movement."

The site posted 9 previously unpublished pages of documents which were released by the NYPD in response to a Freedom of Information Law request. They help to piece together the riots, which have not been very well documented. On that note, a documentary about (and called) The Stonewall Riots will be screening at the New York Public Library tonight (more info in our newsletter). 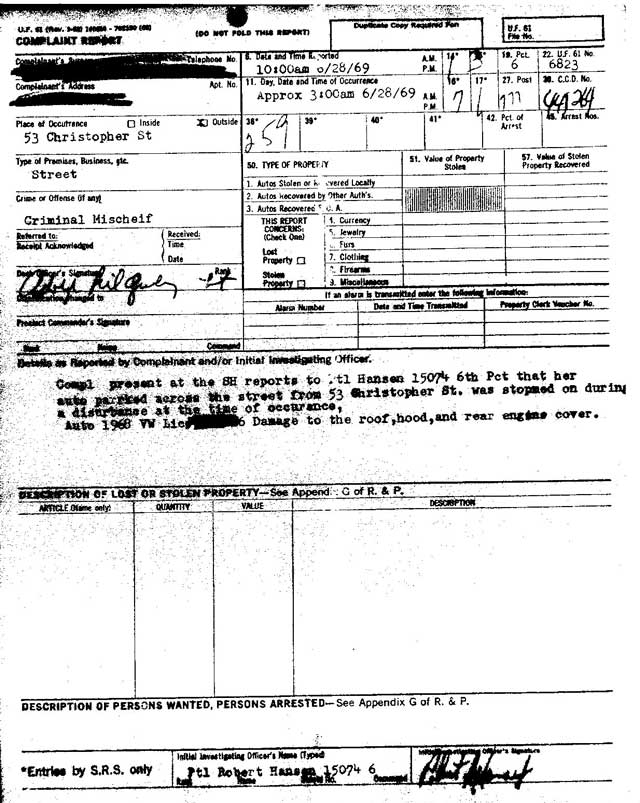