There are about 57,000 people [pdf] living in homeless shelters in New York right now, slightly down from the nearly 59,000 late this summer, but still near the record high, and up from 35,000 eight years ago. The problem of people losing their homes to illness, rent increases, job-ending injuries, mental health problems, and wage stagnation is complex, but a city Independent Budget Office report on the shelter system makes one thing clear: it's costing taxpayers a fortune. 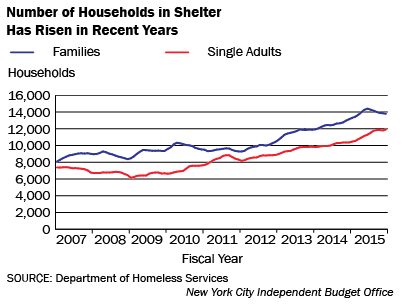 Family and single adult shelters are funded through a combination of federal, state, and city money specifically set aside for the purpose, so though it sounds great to put that money into building permanently affordable housing and investigating and correcting rent overcharges, shoddy repairs, and life-ruining construction at existing buildings, "a substantial share" of the state and federal funding "cannot simply be redirected," the report's authors wrote.

Since 2007, Albany has scaled back its contribution for both family and single adult shelters, while the federal share for family shelters has grown, and the city's tab has increased for single adult shelters. (The title of the IBO's report begins "Albany Shifts the Burden...")

The report cites former mayor Michael Blomberg's elimination of the rental assistance program Advantage in 2012 as a likely driver of the latest shelter population spike. Mayor de Blasio, to be sure, is committing more money to trying to the issue. He has lined up $1 billion in anti-homelessness spending over the next four years, and his administration spent $180 million last year helping 53,000 households pay back rent to avoid eviction, up from 42,000 households and $124 million the year prior. He also started a new rental assistance program called Living in Communities, commonly referred to as LINC, but the report says its impact has yet to be felt.

A spokeswoman for the Mayor's Office emphasized that the city is legally required to provide shelter to homeless people, and said that new funding for pro bono housing lawyers and temporary rental assistance will be cheaper in the long run than continuing to pump money into the ballooning shelter system.

It's worth remembering in all this that a quarter of homeless families in shelters are staying at so-called cluster sites, where private landlords collect rent checks from the city with little oversight over the conditions or programming. At one such building in Brooklyn, the landlord has been collecting $2,700 a month to house families in apartments riven with cracks, leaks, mold, rotting floors, mice, cockroaches, and peeling paint, and services provided by the owner's nonprofit purportedly don't exist beyond the barest appearance. The 83-unit apartment building in question, 60 Clarkson Avenue, formerly housed rent-stabilized tenants, many of them paying less than $1,000 a month. 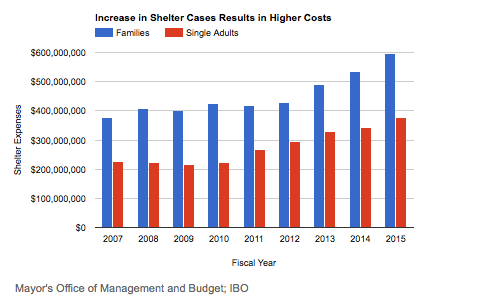 Also since 2007, the average stay at a family shelter has increased from 292 days to 427. One resident at 60 Clarkson remained there for five years before finally finding a Section 8 apartment in Brownsville this summer. The city is in the process of closing that shelter down, but residents are fighting for the right to stay on as rent-stabilized tenants.

As far as solutions to the city's shelter woes go, the Independent Budget Office has no recommendations about actually helping people get out of and avoid homelessness. Money-wise, they suggest that because a state grant is picking up a decent amount of the family shelter costs for now, the city should focus on reducing the single adult headcount if it wants to save money "to fund capital projects, including the development of affordable and supportive housing."

Meanwhile, the mayoral spokeswoman said that the city is working to make life in the shelters less miserable, having inspected 1,700 cluster site apartments, and made thousands of repairs at various shelters.