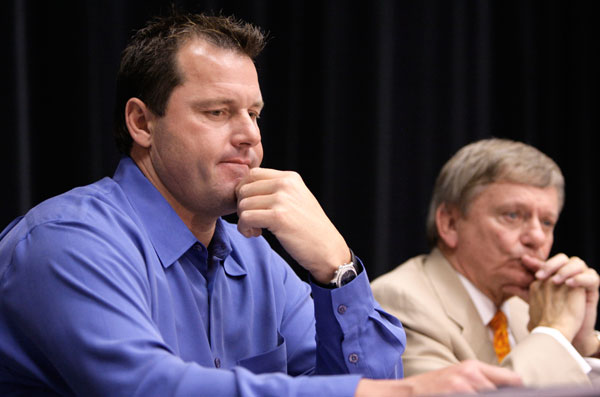 It’s a good thing there weren’t any broken bats in the room because Roger Clemens might have thrown one. Clemens was aggressive and sometimes bullying towards the assembled media at his press conference on Monday, repeating his vehement denials of illegally using steroids and HGH.

The press conference was highlighted by a 17-minute taped conversation from last Friday night between Brian McNamee and Roger Clemens. In the call McNamee initially apologizes to Clemens telling him, “I am sorry that your family is going through this.” McNamee also adds that, “All I did was what I thought was right. I didn’t think it was right, but I thought I had no other choice.”

In an interesting exchange, McNamee talks about speaking with someone named “Jimmy” (presumably Jim Murray who works for Clemens’ agents the Henricks Brothers) in 2004 and warning them him about conversations with someone (the Mitchell Committee?). Clemens denied any knowledge of that, but it certainly sounded like McNamee was referring to an attempt to warn Clemens that he had been forced to testify.

McNamee also repeatedly asked Clemens, “What do you want me to do” and “Tell me what you want me to do.” For some reason, Clemens never directly answered him and never said something simple like “All I want you to do is tell the truth.” But, Clemens did say on the tape “I didn’t do this, Mac.” and McNamee never contradicted him. At one point Clemens told McNamee, “I am trying to find out why you would tell guys that I used steroids”. To which McNamee replied, “I understand that. I understand that.”

While the phone call left a lot to be desired, Clemens’ performance was vintage. He started off by staring down the press and talking about how uncomfortable he was with the audience because of some of the things they had written about him. Clemens told the assembled crowd that he was still Andy Pettitte’s friend and refused to pass judgment on Pettitte or anyone else who may have used PED’s. He also said that he, “never provided any shots that I received over my career.”

And, in a final blast to the press Clemens closed things with, “I don’t need the Hall of Fame to justify that I put my butt on the line and I work my tail off. And I defy anybody to say that I did it by cheating or taking any shortcuts.” He quickly wrapped things up from there and stormed off the stage.

But, that’s not the last we will hear from Roger. He has agreed to go and testify to Congress next week. And, while his performance today may have gained him some votes, some people suggest he has crossed the line.

Photo of Roger Clemens and his attorney Rusty Harden during the Clemens press conference by AP/David J. Phillip

#All I
#And I
#andy pettitte
#baseball
#Brian McNamee
#Congress
#david
#David J
#mac
#mitchell report
#roger clemens
#sports
#steroids
Do you know the scoop? Comment below or Send us a Tip