The Riches Move From Manhattan to Moscow 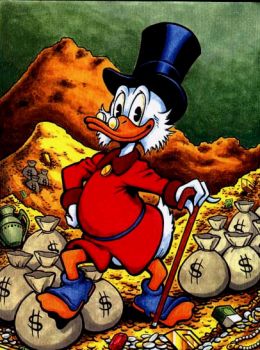 Yesterday Forbes magazine, in their annual ranking of the rich, declared New York City is no longer the billionaire capital of the world. Where have all the dollar signs gone? To Moscow, of course, who beat us out by 3 billionaires (they have 74 to our 71).

Most of the big buck city dwellers are familiar names: Mayor Michael Bloomberg ($11.5 billion), publishing powerhouses Samuel Newhouse Jr. and Rupert Murdoch ($8.5 billion and $8.3 billion), Donald Trump ($3 billion). John A. Catsimatidis is also on the list, having stuffed his pockets through supermarkets, real estate and oil, he's currently trying to become New York's second billionaire mayor. The richest among them, however, is industrialist David Koch -- worth $17 billion!

But why the shift of wealth from New York City to Russia? For one, they have a smaller percentage of long-term capital gains tax. They're also self-made and don't depend on Wall Street. The NY Sun looks at what this all means, stating, "The price of two nights in the Carlton Suite of Moscow's Ritz Carlton hotel now costs $10,000. Two nights in the Executive Suite at the Four Seasons in New York is a mere $4,300."

And not-Forbes rich but still rich people who make more than $1 million/year, State Assembly Democrats are proposing a tax increase of another percentage point, in hopes of raising $1.5 billion more.