The Real Risks DACA Recipients Face When They Protest In NYC

Shortly after President Donald Trump announced the repeal of the Deferred Action for Childhood Arrivals program, nine undocumented New Yorkers linked arms across Fifth Avenue in protest and were arrested. A few hours later, Mayor Bill de Blasio told reporters that while he "wouldn't advise" undocumented New Yorkers to engage in civil disobedience for fear of immigration consequences, the NYPD has a "mindful" approach to policing actions like this one.

At "this type of protest," police only fingerprint arrestees who decline to provide their pedigree information—a name, address, and date of birth—according to NYPD Chief of Patrol Terence Monahan. Everyone else is issued a special desk appearance ticket—an important detail for non-citizens, as the fingerprint database is searchable by Immigration and Customs Enforcement officers.

This third category includes disorderly conduct (the charge leveraged against the Trump Tower protesters Tuesday) as well as turnstile jumping, marijuana possession, open container, or any other quality of life offense.

"A desk appearance ticket is the initiation of a criminal case. That person, typically within six to eight weeks, will have to appear in court," Enriquez told Gothamist. "So, absolutely, depending on the individual's history, these arrests could lead to revocation of their DACA status. Which would then put them at risk of deportation."

Because you can't sit in the middle of a street in perpetuity, however important your protest.

The fingerprinting guidelines offer "some protection, because to the extent that ICE is just churning through the FBI database to see if there are any new arrests on someone's record, then a [desk appearance ticket] wouldn't be visible," added Hasan Shafiqullah, attorney-in-charge for the Legal Aid Society's Immigration Law Unit.

However, "We've had clients denied for DACA due to three disorderly conduct violations, which are treated as misdemeanors for DACA eligibility purposes."

All nine Trump Tower DACA arrestees were released from the 7th Precinct on Tuesday evening, according to organizers with Movimiento Cosecha. None were fingerprinted.

"The bottom line for us is, any time an undocumented person is in custody of any type of agency they are at risk," said organizer Brenda Valladares. "This obviously was a planned event and all nine undocumented folks were briefed by immigration attorneys who donated their time. So they understood the risk. Each case is different: some had never been arrested, some had."

DACA currently offers deportation protections to roughly 800,000 immigrants, 42,000 of whom live in New York. The temporary status, which must be renewed biannually, also affords work permits and in-state college tuition. The federal government will continue to renew DACA for its current recipients through March. New applications are no longer being accepted; DACA issuances and work permits expiring between now and March 5th, 2018 must be submitted for renewal by October 5th, 2017. 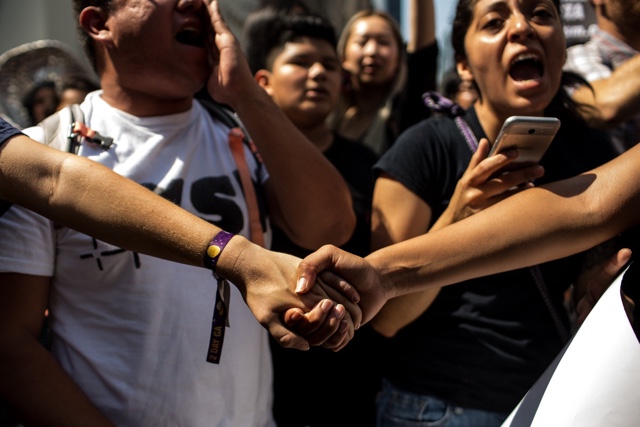 The Daily Beast acquired a new Department of Homeland Security memo this week which states that while DACA recipient names and addresses will not be handed over to ICE in bulk, information will be available upon request.

United States Citizenship and Immigration Services is "claiming they're not just opening up their ledgers and saying, 'ICE just come take a look here,'" Shafiqullah said. "But they're all under Homeland Security, so I don't think that reassurance is that reassuring."

New Department of Homeland Security memoranda prioritize for deportation anyone who is in the country illegally; arrest, not necessarily conviction, justifies ICE intervention under Trump's guidelines.

Still, Shafiqullah added, "Administratively, it would be a huge lift for them to try to go after all of these DACA folks."

Legal Aid released a fact sheet on DACA this week, and is urging recipients and immigrants who are now ineligible to meet with their legal team to discuss alternative options for immigration relief.

"I think that DACA recipients are some of the bravest people, who in certain ways spent a lot of their lifetimes with this guillotine above their head," Enriquez said. "So I don't think they'll take this lying down. Part of the reason DACA even exists is young people's willingness to expose themselves to danger."

"The only way we will be able to win permanent protection is if we come out in mass numbers," countered DACA arrestee Maria Fernanda Cabello. "We are doing this to tell DACA holders everywhere that now is the time. There are so many of us. We need to come together, to be visible, to be heard."

#criminal violation
#DACA
#deportation
#protest
#original
Do you know the scoop? Comment below or Send us a Tip