The Prospect Park West Bike Lane Legal War Is OVER

The cantankerous opponents of the bike lanes on Prospect Park West have decided to drop their long-running lawsuit seeking removal of the lanes, bringing a six-year battle to a close.

Neighbors for Better Bike Lanes and Seniors for Safety announced in a press release that they are voluntarily giving up on the suit against the Department of Transportation, though not because they’ve changed their minds about the bike lanes.

“We continue to believe that the City’s decision in January 2011 to make the PPW bike lane permanent was arbitrary, capricious, and unlawful—based on distorted traffic and safety data cherry-picked by the City,” the groups wrote, citing as evidence a judge’s March ruling that suit was not barred by a statute of limitations.

The saga of the PPW bike lanes could fill a book, though not a very interesting one. Basically, back in 2010, the DOT removed a lane of car traffic from PPW and installed the bike lanes on the east (park) side of the street. A bunch of rich and politically influential (and some elderly) Park Slopers got very upset about the bike lanes, which they claimed were dangerous and made PPW too congested.

The path, meanwhile, has succeeded on most counts, bringing speeding down from three quarters of all drivers to one fifth, tripling bike traffic, and all but ending sidewalk cycling, while driver-on-driver crashes have held steady, according to Transportation Department data. 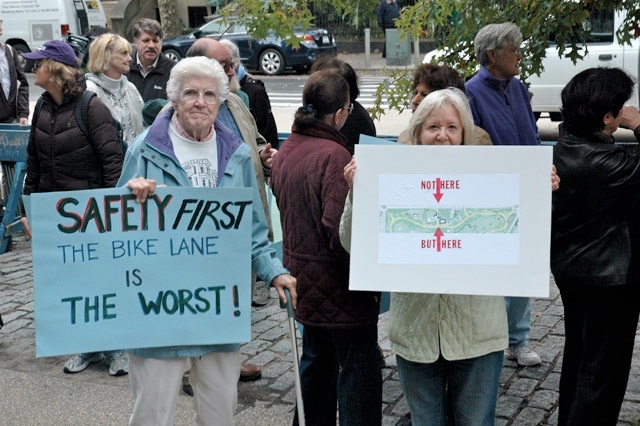 The anti-lane activists filed a lawsuit claiming that DOT had pitched the lanes as a pilot or trial to circumvent public vetting of the project and then unilaterally declared that the lanes would be permanent. Most people liked the bike lanes, but the litigants pushed onward with the suit. It died and was revived several times over the years. If you want to really dig in, you can do so here, but if not, fast forward to the March ruling, when the judge brought it back to life again, and then to today, when the anti-bike laners finally gave up on it.

The press release cited these reasons for the decision to drop the suit:

This is the end of the battle, but the war rages on.

Update: The city's Law Department and the DOT have issued this joint statement:

We are pleased that petitioners discontinued this meritless action, ending a chapter in the evolving story of New York’s ever growing bike network. We always felt confident the case would be decided in DOT’s favor, and as we made clear in our legal papers, none of the claims had merit.

The decision to install this bike lane was made on a sound and rational basis, benefitting the community and achieving DOT’s goals of reducing motor vehicle speeds, providing bike network connectivity, and removing cyclists from the adjacent sidewalks.

#bike lanes
#cyclists
#park slope
#ppw
#prospect park west
Do you know the scoop? Comment below or Send us a Tip