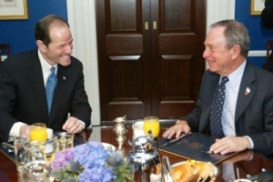 The NY Post has been claiming that Mayor Bloomberg is flirting with the idea of a gubernatorial run in 2010, and the Mayor keeps on denying it. After the latest "Governor Bloomberg" rumor offered by the Post, Mayor Bloomberg told reporters that the Post never contacted his office to confirm whether reports of him discussing plans with a GOP strategist were true: "I categorically will not run for governor."

The Post, however, has an article today, "DENY THIS, MIKE," that relies on an anonymous source, who says, "The mayor can deny it all he wants, but [Bloomberg aide Kevin] Sheekey and [Republican strategist William] Powers did talk about the possibility that Bloomberg will run for governor in three years." And State Senate Majority Leader Joseph Bruno, who is no fan of Spitzer's, believes in his "gut that when it is all said and done, [Bloomberg]'s going to be there." Question: Is Bruno still offering his gut for punching?

According to the Sun, Bloomberg is really not interested in moving to Albany, "I want to support our governor, Eliot Spitzer. This is a tough state, and I'll do everything I can to help him make this state better. But I'll do it from New York City, not from the governor's mansion." And there are citizens who want Bloomberg to move to DC - check out someone's homemade Bloomberg in 2008 video.