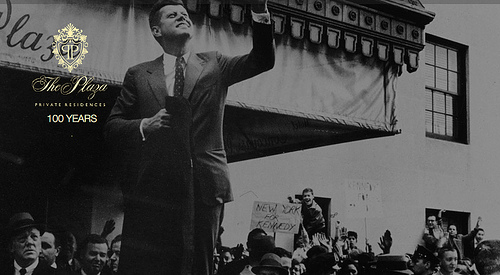 The Plaza, you know that place where the kids in Gossip Girl hang out, is turning 100 years old today. The date is marked by the first guest to ever check in to the famed establishment. Who was it? The fancy-named Alfred Gwynne Vanderbilt, and of course a PR-driven hotel manager was behind that. The NY Times reports that "His arrival was orchestrated by the Plaza’s first manager, who wanted the new hotel to open with a splashy, attention-getting stunt."

How will the 100 year old building celebrate? With a grand party in the Grand Army Plaza, of course. Expect fireworks, music, a cake and names that rival Vanderbilt -- as the hotel, which is still undergoing its renovations, will serve as a backdrop. In its 100 years it has been owned by some big names as well, since the 1940s both the Hilton and Trump family claimed ownership. More recently it was purchased by the El Ad Properties, and will house some expensive condos (and the most expensive penthouse ever).

The Plaza has even hit the big screen decade after decade, showing up in North by Northwest, Barefoot in the Park, Funny Girl, The Way We Were, Arthur, the first two Crocodile Dundee movies, It Could Happen to You and Almost Famous. On the small screen it was in multiple episodes of the Sopranos and Sex and the City. Other notable events and fun facts: the Plaza was depicted in F. Scott Fitzgerald's The Great Gatsby, it served as the venue for an important Kennedy speech (pictured), and Frank Lloyd Wright lived there while the Guggenheim was built. There's a slideshow of the hotel at the NY Times.