The [Penny] Crone Flies From News to Real Estate! 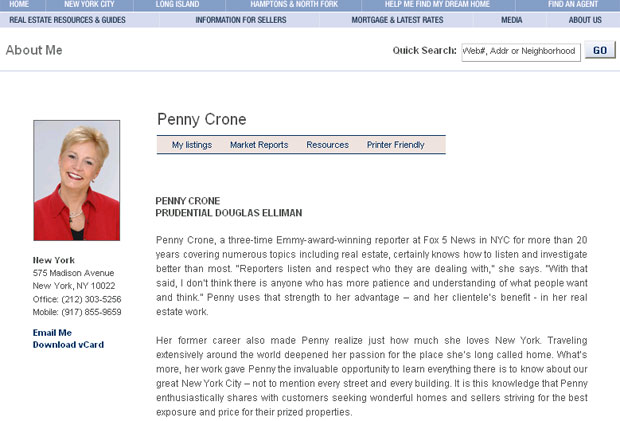 Wow. Penny Crone, the love-her-or-hate-her but totally in-your-face local news reporter (she put the crone in "Crone!"), is now a agent at Prudential Douglas Elliman! We were upset when she was fired from WNYW Fox 5 in 2005.

With her 2-pack-of-smokes-and-Scotch voice and fearlessness to get into a scrum, Crone is a New York institution; as the Diary of the Contemporary Dandy put it, "No assignment was beneath [her] dignity." Which is why we might have to go apartment hunting if only to meet her! [Via FishbowlNY who thought Crone's career change was "just some dada stunt"]

Back in 2002, New York interviewed Crone; she thought Bloomberg would quit and said her worst faux-pas was when she called Yogi Berra "Yogi Bear."

#bloomberg
#douglas elliman
#fox
#local news
#love
#media
#new york
#Penny Crone
#Prudential Douglas Elliman
#real estate
#WNYW Fox
#yogi berra
Do you know the scoop? Comment below or Send us a Tip
A new Gothamist is coming! We’ve moved comments over to our beta site. Click here to join the conversation and get a preview of our new website.