The Ongoing Battle Over Deli Cats

Cats in delis: they are ubiquitous, loved, objected to, necessary, and illegal. City inspectors are constantly on the prowl to ferret out deli felines, but deli owners say they are necessary fixtures to keep their businesses free of pests like mice, rats, and roaches. The New York Times has a story today on the ongoing battle between the city and the cats that are the sentinels of its delis--feline samurai who serve their masters in return for food, shelter, and the occasional scratch behind the ears.

To store owners, the services of cats are indispensable in a city where the rodent problem is serious enough to be documented in a still popular two-minute video clip on YouTube from late February (youtube.com/watch?v=su0U37w2tws) of rats running amok in a KFC/Taco Bell in Greenwich Village. Store-dwelling cats are so common that there is a Web site, workingclasscats.com, dedicated to telling their tales. 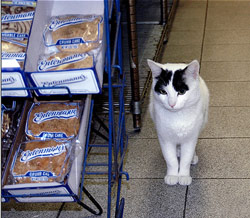 City health inspectors object, however, and the law says that animals are forbidden from any establishment where food or beverages are sold. "Any animal around food presents a food contamination threat," says a rodentologist with the city's Dept. of Health and Mental Hygiene. Indeed, many bodegas and delis forbid customers from bringing their pets inside.

Back in September, a man sued Andy's Deli in Manhattan's West Village for $5 million, after he claimed that he was attacked by the store's cat. Deli and bodega owners face fines of up to $3,000 for having a cat or cats in their establishments, but they also face fines of $300 for the discovery of rodent fecal matter. Lost inventory is another cost, as rats and mice like to chew through containers and eat the food that is left overnight on shelves like a rodent buffet. Some customers object to cats in stores on the basis of feline allergies, which suggests to us the possibility of posting stickers on deli and bodega doors that say "Beware of Guard Kitties."

(Image cropped from It's a deli-CAT-essen! (October, 2006), by Herman Hernandez at flickr)