Facing increasing pressure from community advocates and legal groups, NYPD officials were called to testify in front of the City Council on Wednesday to discuss the department's rapidly growing gang database, and to answer questions about why the surveillance tool is focused almost exclusively on nonwhite New Yorkers.

The hearing came two days after a rare look at the targets of the NYPD's sweeping gang investigations. Data obtained by CUNY law professor Babe Howell, first published by the Intercept on Monday, showed that the number of New Yorkers in the NYPD's gang database has jumped by 70 percent under Mayor Bill de Blasio, even as crime has fallen to historic lows. According to Howell, there were 42,334 names on the database as of February, and 99 percent of those added since de Blasio took office are people of color. That list of names includes hundreds of children between the ages of 13 and 16.

For years, advocates have raised concerns about the shadowy database, seen by some as a more damaging but lesser-known substitute for stop-and-frisk, which was ruled unconstitutional five years ago. New information on the department's precision policing strategies obtained earlier this year by the NAACP's Legal Defense Fund and the Center for Constitutional Rights does little to ease those fears: The department's own definition of a gang member does not require any evidence of criminality, and slides show that wearing a gang-associated color on a certain street corner, or communicating with the wrong person on social media, is enough to land a person in the database. 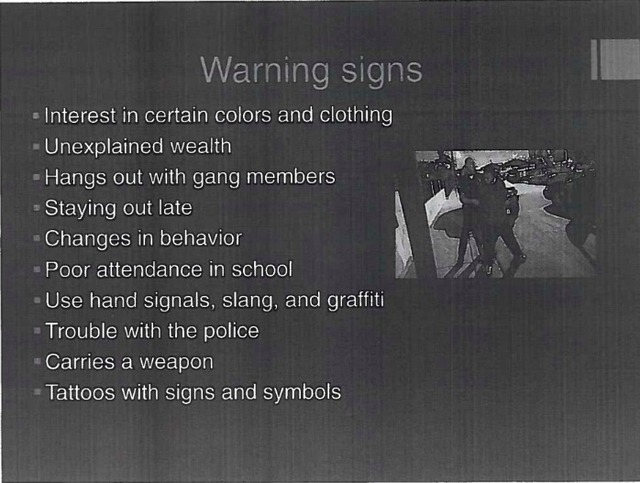 One slide from an NYPD presentation on gang policing obtained by legal groups through public records requests. You can find the full guide below.

Those who've been affected by the database say that being on the list may be used justify further surveillance, enhanced bail recommendations, and heightened charges, among other far-reaching consequences.

"I have cousins who have been arrested because police were suspicious that they were affiliated with gangs through social media posts," Karess Taylor-Hughes, a member of the Black Youth Project in the Bronx, told Gothamist at a rally outside City Hall on Wednesday. "I have family members who are homeless right now because of Permanent Exclusion and because of the gang raids they do."

"With gang sweeps, you're talking about 16-year-olds, 18-year-olds, 20-year-olds, but because you put them in the gang database, and swoop them in a group, now you're taking massive amounts of people out of communities, out of families," added Shanduke McPhatter of Gangstas Making Astronomical Community Changes [G-M.A.C.C.]. He says he was put on the gang database years ago, but has remained an NYPD target because the designation is effectively permanent, with no opportunity to appeal the decision.

Inside City Council chambers on Wednesday, NYPD Chief of Detectives Dermot Shea admitted to the "unfortunate" racial disparities of the database, but maintained that the growing surveillance mechanism was necessary to track a "new generation of computer-savvy gang members." He disputed Professor Howell's 42,334 figure, assuring council members that there were only 17,441 names on the database. He refused to comment on whether it's possible there were significantly more names on the list in recent years, and Howell noted that it's possible the list was purged ahead of the hearing. 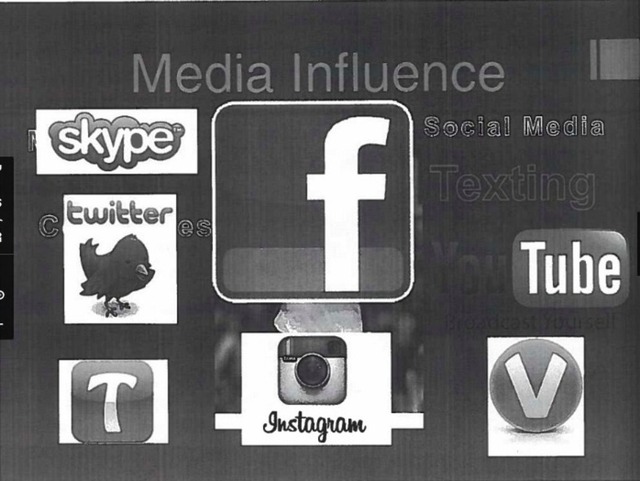 Part of an NYPD presentation on gang policing

Asked by Council Member Donovan Richards if standing on the corner in a red T-shirt would be enough to get him entered into a gang database, Shea replied, "It is possible." He also confirmed that there are no formal NYPD policies to notify the parents of minors who were placed in the database, and that there is no clear mechanism for getting oneself removed.

"Over last decade the use of social media by crews has exploded," Shea explained, when pressed on why the database was growing, even as gang-motivated incidents account for less than one percent of the city's crime. "Criminal groups routinely turn to computers and the internet to coordinate and recruit new members. So public social media platforms are patrolled, in a sense."

While police officials claim that those patrols, both online and in real life, are focused on known gang members, critics say the NYPD's own criteria for gangs shows that's not the case. Instead, they see another tool for the NYPD to pursue dragnet surveillance of communities of color, with little to no transparency.

"It's not a coincidence that in the wake of the ruling that NYPD's stop and frisk is unconstitutional, the NYPD has pivoted to focus on so-called precision policing, which targets the very same communities," said Marne Lenox, assistant counsel with the NAACP's Legal Defense Fund. Testifying in front of the City Council on Wednesday, she spoke of a client named Patrick Littlejohn, who was wrongfully arrested by the NYPD along with hundreds of others as part of a massive gang takedown at Eastchester Gardens. He subsequently lost his job as an after-school basketball coach and tutor, and remains unemployed two years later.

Others shared their personal, emotional stories of encountering military-style raids in their own communities. One woman said a group of cops kicked down the door and wrongfully arrested her son, traumatizing her five-year-old grandson in the process. "This boy needs his father, but because of some secret indictment, he's growing up without one," Ms. Smith said. "They swarm our communities in riot gear and act like they're helping, but they're racist, from the administration down, and everyone is aware of it."

Reached for comment, mayoral spokesperson Olivia Lapeyrolerie would not address whether the mayor's office was concerned with the racial makeup of the database, saying only that, "the database is an important tool NYPD uses to keep our city the safest big city in America."

#City Council
#gang
#gang database
#gang raid
#nypd
#stop and frisk
#original
Do you know the scoop? Comment below or Send us a Tip