The NYPD is on the hunt for seven suspects and nine witnesses in connection with the assault on two police officers on the Brooklyn Bridge during the Millions March on Saturday night. In a sign of how seriously he's taking the incident, tonight NYPD Commissioner Bill Bratton held his second press conference in as many days to discuss the investigation, and announced a $12,000 reward for information leading to the arrest and conviction of suspects in the case.

One arrest has already been made: CUNY adjunct professor and poet named Eric Linsker, who police say tried to throw a trash can from the Brooklyn Bridge pedestrian path onto the roadway below, where NYPD officers were gathered. Investigators say two lieutenants from the NYPD Legal Bureau, Philip Chan and Patrick Sullivan, stopped him and, as they tried to take him into custody, other demonstrators violently intervened. Here's video:

During the melee one protester allegedly broke Lieutenant Chan's nose, and another kicked Lieutenant Sullivan, causing multiple cuts and bruises. Linsker escaped, but he left behind a backpack containing a black ski mask, hammers, his CUNY ID, marijuana, and his passport, and he was arrested by members of the NYPD and FBI's Joint Terrorism Task Force shortly before 4 a.m. on Sunday. 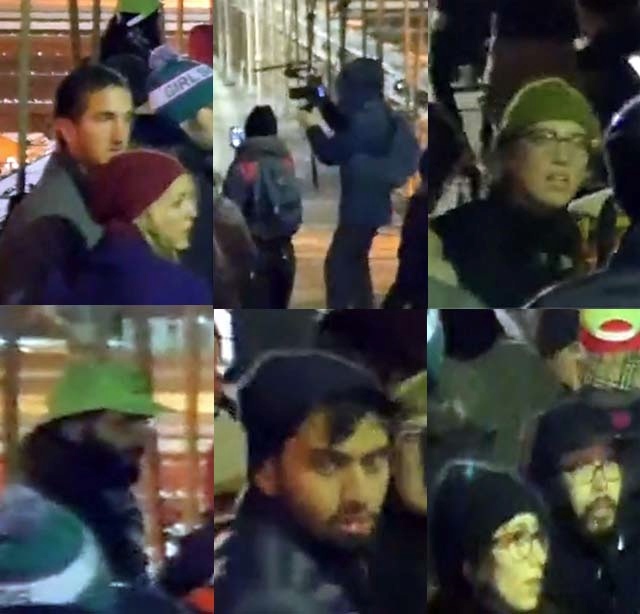 Witnesses sought by the NYPD

The NYPD is now trying to locate the following suspects and witnesses, and has released enhanced imagery taken from the video. The NYPD's official statement notes that "Male Witness #2” is "wearing a green baseball cap, possibly indicative of being a legal observer." The two “Camera Witnesses” are "independently filming the incident." And the “Couple Witnesses #2” may be "in the company of another legal observer standing next to them."

Legal observers with the National Lawyers Guild frequently wear bright green hats at demonstrations. At a press conference last night, Bratton said he was “very disappointed” that it appears the legal observers did "not take any action whatsoever to assist the police officers, to try to mitigate the assault on our police officers.”

In response, Martin Stolar, a lawyer with the guild, told Capital NY they're “not parade marshals. They’re not hired by parade organizers. They're there as neutral observers."

Linsker is charged with robbery, resisting arrest, reckless endangerment, obstructing government administration, and unlawful possession of marijuana, as well as two felonies: assault on a police officer and inciting a riot in the first degree.

Tonight Bratton announced a $12,000 combined reward for information leading to a conviction, with $2,000 coming from Crime Stoppers, and another $10,000 from Citizens Outraged at Police Being Shot.

Anyone with information regarding these suspects, these witnesses, or this incident in general, is asked to call Crime Stoppers at 1-800-577-TIPS (8477), or 1-800-COP-SHOT. The public can also submit tips by logging onto the Crime Stoppers website or by texting their tips to 274637 (CRIMES) then enter TIP577.

#brooklyn bridge
#eric garner
#Millions March
#millions march nyc
#protests
Do you know the scoop? Comment below or Send us a Tip