The NYPD Experimented With Policing Bad Drivers For A Week

Paralleling a release on a crackdown on speeding drivers during one weekend last month, this afternoon the NYPD issued a statement boasting that a "pedestrian safety and awareness week" resulted in 4,347 moving violations and 1,308 parking summonses last week. Though the release notes that officers ticketed motorists for failing to yield to pedestrians in "targeted areas and intersections where there is a history of pedestrians being struck by vehicles," there is no mention of the department issuing any speeding tickets.

"The NYPD is endeavoring to get with the times, but they still have a long way to go," Transportation Alternatives' executive director, Paul Steely White said, calling the department's week-long focus on pedestrian safety "tiny steps."

"The true benchmark, the real measure of success, is how many New Yorkers are being killed or injured on the city's streets," White added. 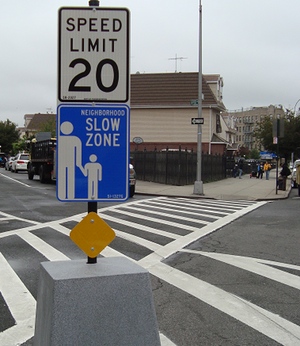 An unidentified pedestrian was killed this morning attempting to cross Rockaway Boulevard (the driver remained at the scene). A man in his 40s was struck by a Range Rover driver this afternoon at 2nd Avenue and East 89th Street. In East New York yesterday a 72-year-old woman was struck in the crosswalk by an unlicensed driver.

Earlier today, City Council Speaker Christine Quinn vowed to vote on a bill that would lower the speed limit to 20 mph across the city on residential roads and streets fewer than 60 feet wide. "Our goal is to pass it before the end of the year,” Quinn said.

The bill may run afoul of state law, which requires any lowering of the speed limit to accompany other measures designed to calm traffic. WNYC has reported that the bill may end up with the final speed limit of 25 mph.

The City Council is also expected to pass a bill today adding speed humps to more than 50 areas near schools citywide. “This legislation will help to protect pedestrians—especially our youngest pedestrians—through innovative roadway engineering," Quinn said in a release.

By
James Ramsay
Extra Extra: When you hear 'caviar,' do you think 'New Jersey?'