During our coverage of the eviction of the Occupy Wall Street protesters early this morning, a NPR reporter, a New York Times reporter, and a city councilmember were arrested. Airspace in Lower Manhattan was closed to CBS and NBC news choppers by the NYPD, a New York Post reporter was allegedly put in a "choke hold" by the police, a NBC reporter's press pass was confiscated and a large group of reporters and protesters were hit with pepper spray. According to the eviction notice, the park was merely "cleaned and restored for its intended use." If this is the case, why were so few people permitted to view it?

"Get the fuck back! Fuck back I said!" The NYPD officer's voice was amplified behind the plexiglass helmet as he violently shoved protesters and reporters away from the intersection of Cortland and Broadway, one block from Zuccotti Park. It was 1:20 a.m., shortly after the police cordoned off the park to prepare for the cleaning. Requests to gain entry or move south down Broadway to see what was happening were met with the reply, "We have to clear the sidewalk." One protester asked, "Isn't the sidewalk public space?" The riot shields kept moving forward. "Clear the sidewalk. Move! Now!"

Police began vigorously jamming the torsos of those who stood on the sidewalk with their batons. One officer mockingly shouted, "Shame! Shame!" as he angrily shoved protesters further back up Broadway. A strong scent of vinegar punctuated the air, and a row of protesters groaned in pain. Water materialized out of the crowd and the demonstrators began pouring it into the afflicted's eyes. 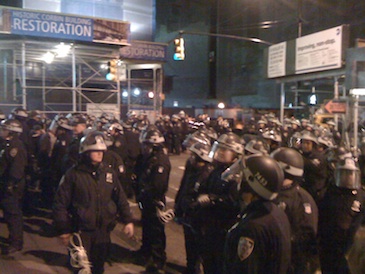 Cornell Brown, a producer at an ad agency who lives on Wall Street, tried to speak with a police officer during a lull. "I know you're just doing your job," he said, "But you have to see that this shit is wrong." The officer shrugged. Brown snaps a photo. "You know they're hurting inside because they're on the wrong side of history. You have to feel bad for them."

After approaching the west side of the park at Church and Cortland at around 2 a.m., a police officer standing behind a barricade is asked why members of the press aren't permitted to view what's happening under the massive flood lights in Zuccotti Park. "Stay behind the barricade." Would two employees watching the door at One Liberty Plaza let us in to take photos of the park from behind glass? "We got in trouble for that already," one replied. "We let the press in. The cops yelled at us. Now get out of here, walk south." 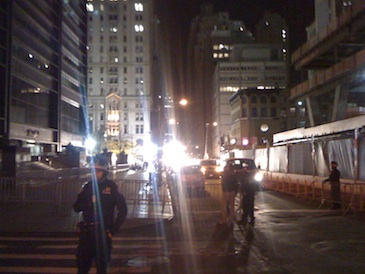 No NYPD officer seemed to be in possession of the eviction notice. A man holding a copy on Church Street offered to let us shoot a picture of the text, but wouldn't let us touch it. "I'm putting it on ebay," he said. "I want my grandkids to know that I had a copy of this notice."

As the police pushed the crowds further from the park, it was clear that no one assembled on the corner of Cortland and Broadway would witness what was happening in Zuccotti Park. Shen Tong, one of the organizers of the student democracy movement in Tiananmen Square in 1989, tried to mobilize a group to head north and find more protesters.

"Who here is committed?" he asks, grabbing the shoulders of a few demonstrators who appear to be college-aged. "I need you to stay while I go find the other group." As Tong walks north, he finds that he cannot move. John Street has been blocked by the NYPD.

#first amendment
#freedom of the press
#mayor bloomberg
#nypd
#occupy wall street
#press
#protests
#Ray Kelly
#Zuccotti Park
Do you know the scoop? Comment below or Send us a Tip