The NYPD Can Now Pinpoint The Exact Location Of A Gunshot

If a gun goes off in New York City, the NYPD will soon know exactly where it was fired.

Yesterday the NYPD announced the deployment of a new gunshot detection system called ShotSpotter on a trial basis in five zones of approximately three square miles. Zones in the Bronx went live yesterday, while zones in Brooklyn will be operational soon.

ShotSpotter uses 300 sensors spread over the 15 square miles to triangulate the location of gunshots to within 25 meters. The system can also identify the number of shots, whether more than one firearm was involved, and the shooter's direction of travel.

"It's going to send a message to our communities that if you fire a weapon, the police are going to know immediately," said Mayor de Blasio.

NYPD Commissioner Bill Bratton pointed out that "cities that have worked with the system indicate that on average 75% of shots fired are never called into 911. That's a phenomenal under-reporting of incidents of violence in any city." He noted that he anticipates an increase in the NYPD's statistics on shooting incidents as a result of ShotSpotter's additional reporting.

Data will be collected from approximately 8,000 CCTV sensors citywide, as well as license plate readers, radiation sensors and 911 calls so that police officers can view information about the area in which the shots occurred immediately after they receive the alert. 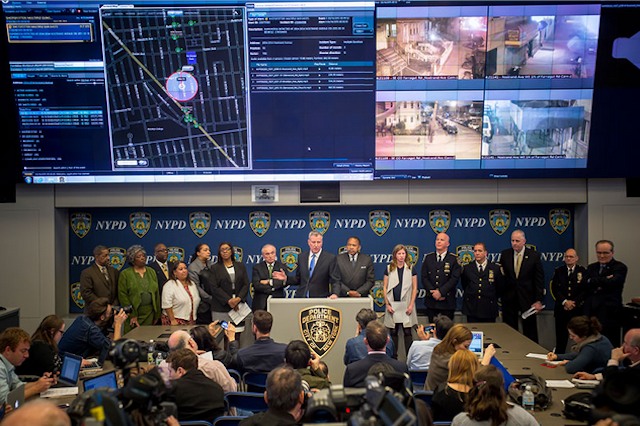 "What we do here in New York, which is different from other cities which deploy this technology, is that we built ShotSpotter into our domain awareness system," said the NYPD's Information Technology Deputy Commissioner Jessica Tisch.

All ShotSpotter data is owned by the NYPD, and the one-year trial of the system will cost $1.5 million.

The NYPD tried a gunshot detection system in the past. "There were so many false positives that the whole system became just, for lack of a better word, noise" explained Tisch.

ShotSpotter has improved on earlier systems by requiring that alerts be sent to the NYPD only when a gunshot is picked up by three separate sensors. Alerts are also first sent to an offsite ShotSpotter command center where a trained technician quickly verifies that they are true positives before the NYPD is alerted. Public Advocate Tish James said, "This technology accurately detected 80% of test shots."

Before the system was operational and able to send alerts, sensors which had already been installed picked up the shots which killed Detectives Rafael Ramos and Wenjian Liu in December. "It was an additional piece of evidence," the commissioner said. "This is a very significant safety, as well as public safety, feature."

The mayor and the commissioner also revealed that overall crime was down 10 percent in the last 28 days. There have been only 19 shootings this week, compared to 30 last week. Transit crime is down 20 percent for the year to date, and arrests are also down 18 percent for the year.

#domain awareness system
#gun violence
#nypd
#shotspotter
Do you know the scoop? Comment below or Send us a Tip