The Non-Gearhead's Guide To Bike Gear

Finding the right gear for your bicycle can be a daunting journey, paved with fussy know-it-alls and jargon seemingly designed to send a casual rider spiraling into self-doubt. One wrong turn into a certain kind of bike shop and suddenly a man in a tiny hat is lecturing you about geometry, huffing about the height and tilt of your saddle (here you were thinking cyclists sit on seats). As he tosses you a pair of clip-on cleats inexplicably deemed "clipless," you catch your reflection in a row of helmet mirrors and feel like a fraud, or worse: a Fred.

Dressing your ride with the right accessories shouldn't be this way. So much of the joy of cycling lies in the lack of gatekeepers and low barriers to entry, the chance to enjoy the freedom offered by a bike without much preparation, maintenance or money. For the urban cyclist especially, whose primary concern is surviving these bloodthirsty streets, functionalism is key. But sifting through the mountains of shiny doodads for the good stuff isn't always easy. Below, a guide to what you need to have, what you should have, and a few fun extras worth considering.

Bicycle: Every cowboy needs a horse. If you're in the market for a new ride, spend some time thinking about what it is you'll be using it for—where you'll go, how often, and what you're willing to pay. Brand new bikes start at around $300, and can be found at local shops across the city (these recommendations hold up). Keep in mind that people who buy expensive bikes and leave them outside in New York typically don't have those bikes for long.

If you're alright with buying used, cheaper options abound, including at the great Recycle-A-Bike, a non-profit that works with youth to refurbish bikes. Craigslist and Facebook have plenty of hand-me-downs as well, which you should absolutely test out before buying. I personally bought my most recent sweetie at a flea market run by my building's super, after I'd stopped in to mention a drainage issue with our sink. The bike is great; the sink, not so much.

Bike Lock: Having your bike jacked is a sad rite of passage for many regular city riders, but you can at least lessen the chances by making it look harder to steal than the one next to it. At minimum, invest in a heavy-duty U-lock that's not too big (harder to get a pry bar in there), along with a cable that fits through the back wheel (the more expensive one). Get yourself a pair of skewers if you have quick release wheels, and a seat lock if your saddle is on the nicer end.

Despite cool-sounding names like "Kryptonite: Fahgettaboudit," pretty much all U-locks are easily picked. As such, the truly serious anti-theft folks say you need a heavy chain with an indestructible padlock.

Gothamist Editor-In-Chief John Del Signore, meanwhile, swears by a two U-lock method, which was passed down to him when he bought his first bike on East 6th Street in 2005. He locks the back wheel and frame to a pole or other structure, then uses the other lock to secure the front wheel to the frame. When riding, he keeps one clipped to his bike and the other dangling from his handlebars.

John has never had his bike stolen, though he did once lock up on a piece of scaffolding that disappeared (his bike was just sitting there, in its lonesome, when he returned). Tip: don't trust scaffolding or trees. 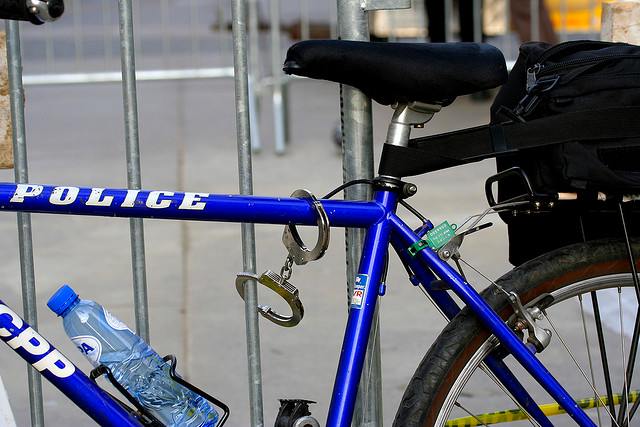 Bell: You're legally required to have a bell on your bike, and while Police Commissioner James O'Neill may not follow the law, you still should. The penalty for not having one is typically a $50 fine, though there's also a chance that dozens of armed NYPD officers will seize your bicycle and stick you in handcuffs.

Technically speaking, you're actually just required to have a sound-emitting device that carries over 100 feet. Sirens or whistles are explicitly barred, but everything else flies, meaning your future bell could be a brass gong or an actual car horn. We recommend sticking to a standard bell, which should cost around ten bucks.

Head/Tail Lights: Equip your whip with a white headlight and a red tail light, both of which are legally required between dusk and dawn. Studies show that you're probably not as visible as you think while riding at night, and so it doesn't hurt to overdo it. Safety vests, blinking spoke-lights, knee and ankle reflectors — all worthwhile options.

Things You Should Have

Helmet: A lot of well-meaning people, and also some cops, will tell you that you have to wear a helmet. This is false. Unless you're under the age of 14, it's legal to ride without a helmet in New York. It's also not true that helmets are the most important tool for keeping cyclists safe (that would be good infrastructure and more cyclists) or that they prevent 85 percent of head injuries.

That said, you should wear a helmet. They come in many types, for every kind of cranium. Personally, I like this one, on account of its ample ventilation and the blinking LED light on the back.

The other thing to know is that you should not buy a bike helmet used, as manufacturers say the foam deteriorates after about three years. Expect to spend between $25 and $75.

Multitool: This lightweight set of hex keys and screw drivers will solve a host of mechanical issues, ranging from seat adjustments to brake tightening to handlebar realignment. They'll run you about $17.

Bike Pump: While it's easy enough to get free air at bike shops, having a good pump at home often comes in handy. Inspect the side of your tires to find the recommended pressure, then do a quick check before you ride to make sure you're good. A decent pump is around $40.

Chain Lube: The bike chain is the (hopefully) silent workhorse transmitting your human-power into speed, and so it's critical you treat it well. Apply a good chain lube every month or so, depending on how often you ride. Do not use WD-40, which will actually dry out your chain, or any other non-bike product for that matter. In addition to the chain, drip some lube into your brake cables and, if you've got them, derailleurs every so often. I use Tri-Flow ($5).

Mudflap: When you're zipping through winter slush lagoons, having a fender over your back wheel goes a long way toward keeping both you and your bike clean and dry. A large water bottle and a bit of creativity will also do the trick. Non-trash options cost about $20.

Rain Pants: Same concept, but for your body. Gothamist Editor Christopher Robbins recommends this brand, which he describes as "glorified trash bags." They cost around $25. (Alternatively, you can get a whole pack of trash bags for $1.99.) If you expect to ride a lot in the rain, get some nicer ones for double the cost. Either way, better than getting soaked before you get to the office (or not biking at all).

Cycling shorts (hear me out!): If you're not planning on multi-hour rides or track racing, you absolutely do not need specialty bike clothing. Cycling shorts, in particular, are not really practical for bike commuting or leisurely rides—you kind of look like you're wearing an adult diaper, yet it's much harder to use the bathroom, and there are no pockets unless you get the jersey, which is a whole other thing.

I myself was a spandex-skeptic until about two weeks ago, when I borrowed a roommate's (clean!) pair of Black Bibs for a ride to Fort Tilden. The padding inside the shorts—the chamois—was life-changing, vis-à-vis butt soreness. So now I am a reluctant convert, despite previous anti-Lycra statements. Just saying, if you find yourself regularly biking 10 miles or more, it's something to consider.

Bike Speaker: Listening to music while biking is great, but using headphones takes away from your spacial awareness. Plus it's also illegal to use two headphones at once. The solution: a blue-tooth speaker that attaches directly to a bike or clips onto your clothing.

For what it's worth, this is the best song to listen to while biking.