You no longer need to twist your Auntie Anne's pretzel into a crucifix before entering the infamous men's restroom of Penn Station. New renovations have made the lavatory cleaner, nicer, and more functional than the rest of Penn Station itself. Located next to TGI Friday's on the main Amtrak concourse level, the restroom is now immaculately equipped to bear the quiet sighs and unspeakable horrors of the hundreds of thousands of human beings who squeeze through Penn Station's bowels every day.

Amtrak, which owns Penn Station, began renovating the men's bathroom in February (the adjacent women's room was finished in January). The MTA and other state authorities have clashed with Amtrak over its work on the commuter hub, claiming that they impede their own efforts to rehab the grey, time capsule of woe. But if Amtrak and the MTA must have a pissing contest, they should have it at one of the new 21 pristine Toto urinals. 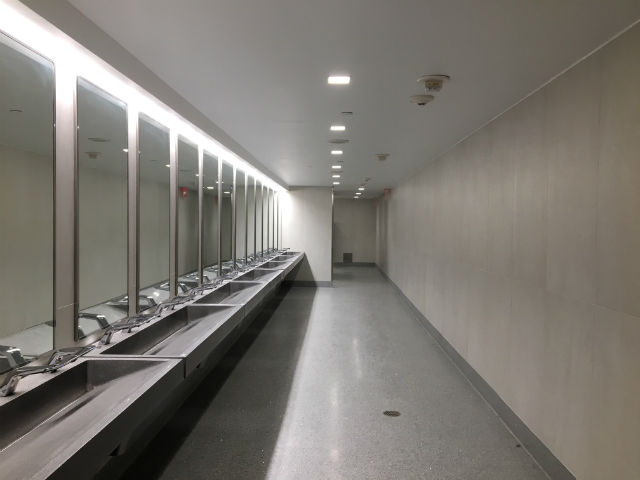 "Holy shit," one man remarked as he crossed the bathroom's threshold on Tuesday, before whistling in astonished approval. "It don't even smell bad yet!"

That man, 36-year-old Mark Dudenhoffer, told Gothamist that he was an ironworker who commuted into Penn Station every day from East Islip and frequently used this restroom. Dudenhoffer described the conditions in the previous bathroom as "a shit den."

"That's a home run right there, bro," Dudenhoffer said, pointing to the new restroom. "Even the sinks! They're the really nice ones with the water and the soap and the air dryer all in one. Bro, I'm so impressed with what they've done." 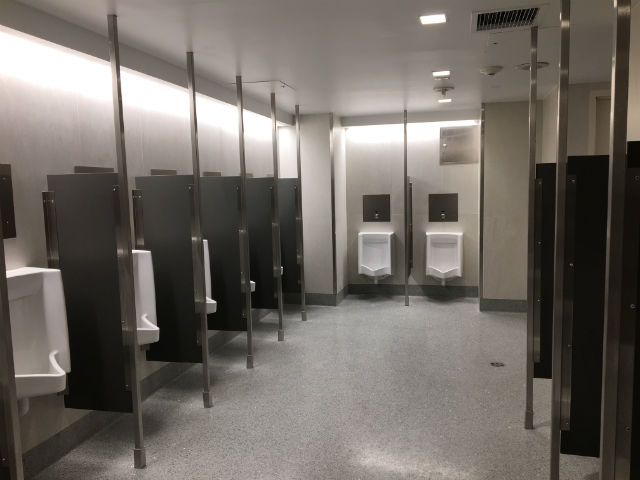 Derrick Wilson, 51, cleans commuter buses outside Penn Station, and said he had to use a temporary bathroom outside or the NJ Transit restroom (that has a total of three urinals) while the men's room was being renovated, but that it was worth the wait.

"It's a whole lot nicer. It's cleaner. When I first walked in there yesterday, I thought it was a hotel lobby," Wilson said. 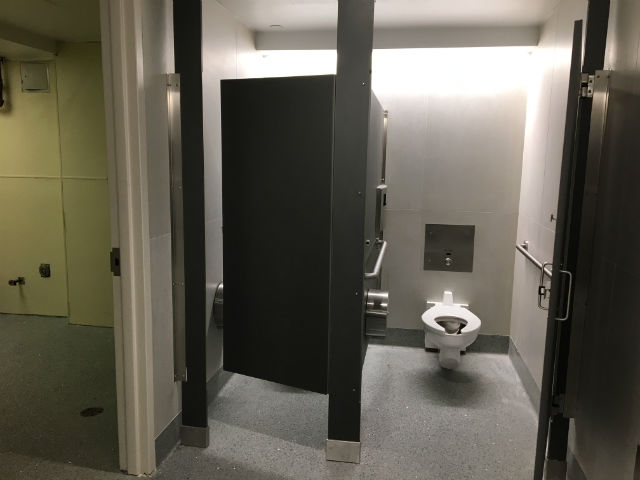 According to an Amtrak press release, current projects include a "design of the refresh for Amtrak’s ticketed waiting room, including a new coffee bar, design for a refreshed and expanded ClubAcela lounge, renovation of escalators, and new retail offerings."

Amtrak will move the majority of its operations across the street to the Farley Post Office in 2020, so enjoy these refreshed restrooms while you can.