The New York Public Library Gets a Facelift 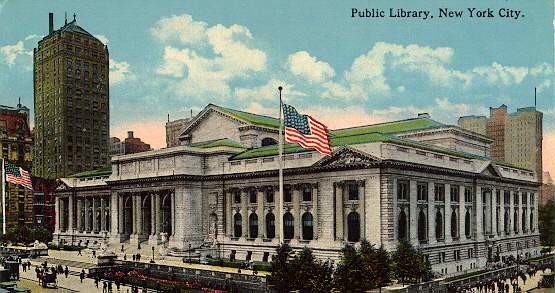 By 2011, our New York Public Library will have a new face. The building, which looms over Bryant Park and 5th Avenue, has been subject to urban pollution and a whole lot more in the past 96 years. From the press release:

The Library announced that it is undertaking a three-year restoration of the facade of the historic building now formally known as the Humanities and Social Sciences Library. The project will include a complete cleaning of the building's Vermont marble, repair of almost 3,000 cracks, protection and preservation of the many sculptural elements, and repair of the building's roof, stairs, and plazas.

Over the past decade the interior has been restored to its original grandeur, and this is the last step in making the landmark sparkle again. The building is described as a white marble Beaux-Arts revival, and was designed by John Merven Carrère and Thomas Hastings. After 12 years of construction, it was completed in 1911 (at the time it was the largest building in the United States), meaning that the restoration will be final in time for its centennial. Read more about its history here, and this Scientific American issue from May 1911 which profiled the then new building.

Expect to see protective netting and sidewalk bridges around it for a while, restoration work will begin in spring 2008 with the Bryant Park facade. In the meantime, more than $5 million is still needed in funding, so pay those late book fees!