The New Museum and Calvin Klein Make a Splash

Notice anything funny about the Calvin Klein billboard below? No, not the hot pink splashing. The giant ad that hangs above Lafayette and Houston has a secret in the "negative space" left by the splashed paint. The silhouette is of the new New Museum building on Bowery. Here is what the billboard looked like over the past few days up until last night: 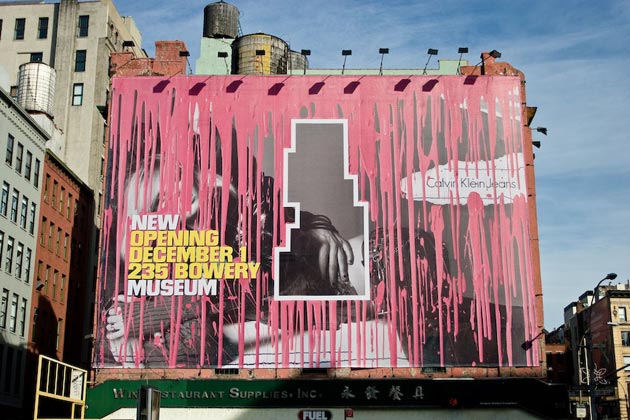 The two establishments joined forces for an art-fashion splashstravaganza...now that's what we call synergy! We're just happy they didn't pair up with American Apparel. Here's what the New Museum told us:

"As part of our ad launch campaign produced by Droga 5, the New Museum has partnered with Calvin Klein on an unconventional initiative that seemed consistent with the museum’s focus upon new art and new ideas. Since Monday, the famed Calvin Klein billboard on Houston at Lafayette has been “defaced” with pink paint and today, the drips have revealed the shape of the building and our new brand, announcing our public opening on Dec. 1st. The co-branded billboard will remain in place until December 3rd. Calvin Klein Collection has partnered with the New Museum for the first major campaign preview celebrating the Museum’s new home on the Bowery."