Roughly 7,300 cyclists commute over the Williamsburg Bridge every day, according to the Department of Transportation. In just 163 days, when L train service between Brooklyn and Manhattan shuts down for 15 months, the DOT expects that figure to "double or even triple." On Thursday morning, the City unveiled a new two-way protected bike lane on Delancey Street that will help get all those cyclists in, out, and around Manhattan.

The lane itself is a quarter mile long, stretching from the base of the Williamsburg Bridge west to Chrystie Street; cyclists can then turn onto the bike lanes on Allen Street and Chrystie to destinations north and south. Currently the Delancey Street lanes only offer barrier protection from Delancey Street traffic east of Allen, but the DOT's Manhattan Borough Commissioner Edward Pincar, Jr. said at a press conference that they are still "putting the finishing touches" down, including more paint and additional planters that will act as barricades. 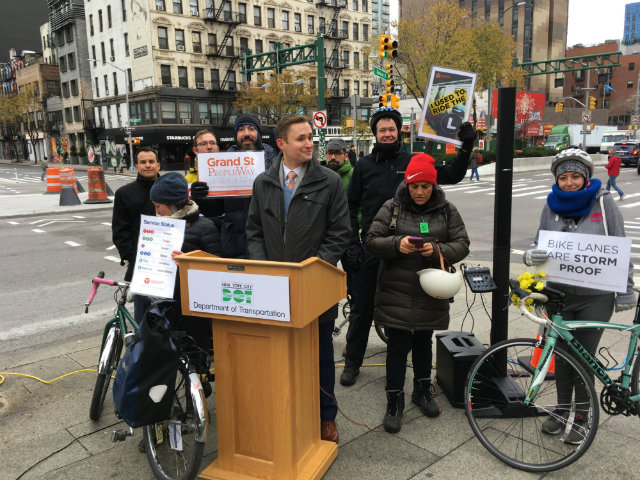 The DOT's Manhattan Borough Commissioner Edward Pincar, Jr. (at podium) stands with advocates from Transportation Alternatives at the unveiling of the new bike lane on Thursday morning (Gothamist)

A new traffic island with jersey barriers sits on Allen Street as a refuge for cyclists caught between light cycles, but it remains to be seen if the intersections will be kept clear during rush hours. The DOT said they were planning on beefing up the gradient of the concrete, insisting that it was a "first attempt." 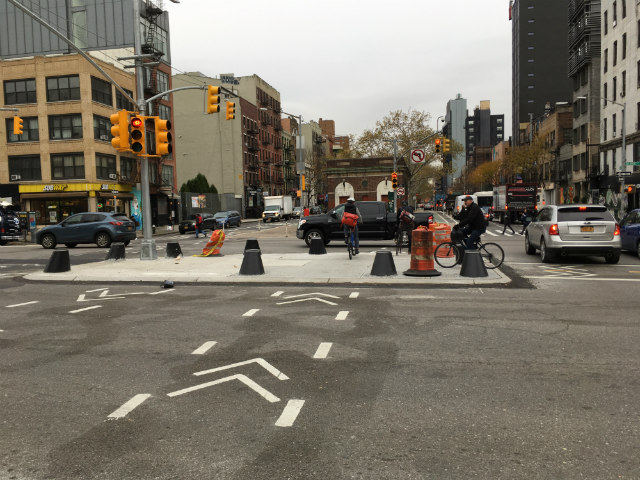 The traffic island on Allen and Delancey (Gothamist)

No longer will cyclists be ticketed for coming off the bridge and traveling straight through the harrowing Clinton Street Gap. [Editor's note: Wanna bet?] But does the DOT really expect 20,000 cyclists to do it every day without incident? 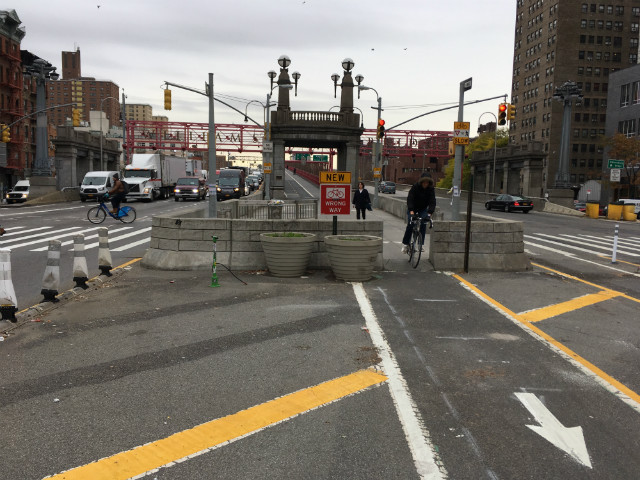 A cyclist heads west through the Clinton Street Gap (Gothamist)

Under the current configuration, cyclists traveling east are supposed to enter the bridge by riding for a few bone-jarring feet next to the automobiles screaming up the bridge's approach, then taking what is essentially a 90-degree left turn up the steep, narrow ramp meant for bicycles, while avoiding the pedestrians congregated on the island.

The spot is just a few feet from where 12-year-old Dashane Santana was fatally struck by a minivan driver in 2012, one of two pedestrians killed and 24 others seriously injured on Delancey Street between 2012 and 2016. 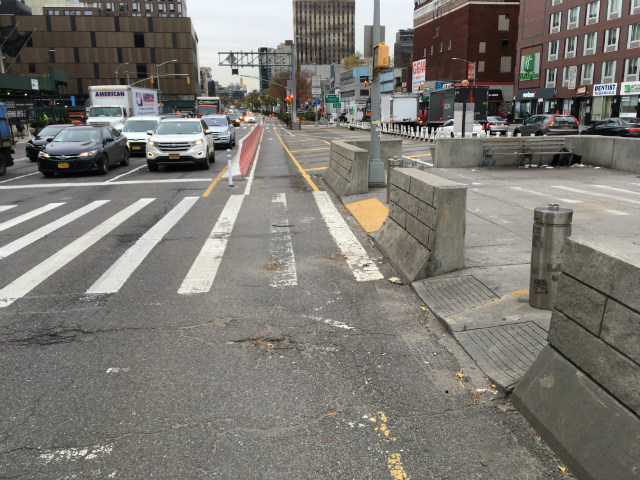 Ted Wright, the DOT's director of bicycle and greenway programs, acknowledged that none of this was good, but that there wasn't much that could be done about the Clinton Street Gap in the short-term.

"It's a security feature of the bridge, and it expands deep into the ground," Wright said, explaining why the DOT can't just widen the gap or carve out another one. 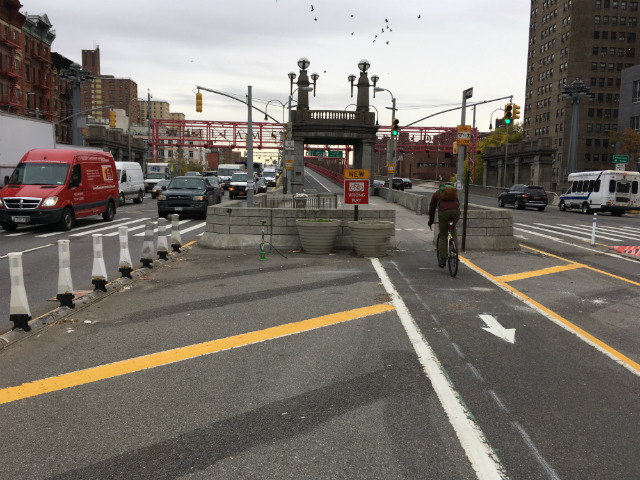 Wright added that the agency was looking into how to fix the issue as part of the larger Delancey Street capital plan, but come April, the surge of cyclists—and car riders and bus riders and straphangers and "slugs" and the rest of the 100,000+ extra people the MTA and DOT anticipate will use the Williamsburg Bridge to get in and out of Manhattan once the L shuts down—may dial up the urgency. The DOT is also planning on changing the traffic patterns in the neighborhood to hopefully lessen congestion, with perhaps the biggest change being that drivers will no longer be able to use Clinton Street south of Delancey to get onto the Williamsburg Bridge while the L train is out of service.

Instead, they will have to take South Street to Allen Street, or make a left onto Grand and then a right onto Norfolk, Essex, or Allen. 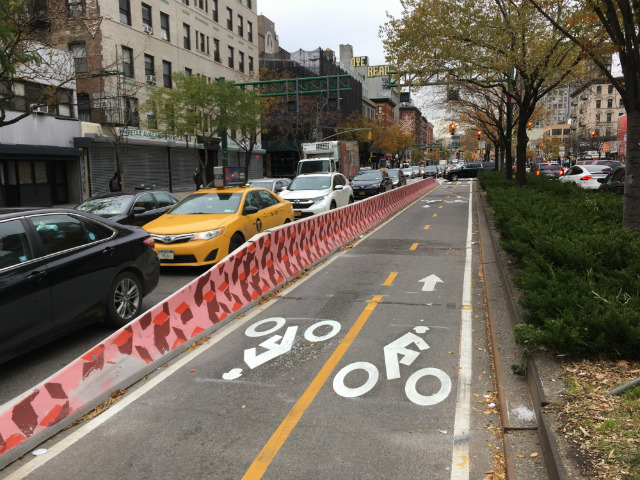 One of the cyclists exiting the bridge on Thursday morning, Michelle LoBianco, a photographer who lives in Bushwick, said she rides 6.2 miles to her office on Hudson Street because "it is so much faster than taking the train."

LoBianco was only able to give us a quick reaction to the new Delancey Street lane before her light turned green: "Thank God."

#bike lanes
#cycling
#delancey street
#l train shutdown
#vision zero
#original
Do you know the scoop? Comment below or Send us a Tip