At age 95, Jean recalls the 65 years she and her husband Rocco lived together on the second floor of 192-4 First Avenue in the East Village as "happy years, wonderful years." The petite nonagenarian with a carefully blowdried bob lives alone now, tidying her pristine railroad apartment and paying $84 per month—a major perk of having lived in the rent-regulated building since 1938.

But Jean says she has felt under siege since Lionel Nazarian bought the building last June for $13 million. He's since put her and a small group of rent-regulated tenants through hell, they say, sending them threatening emails, cutting off utilities, pestering them with buyout offers, and turning their building into a chaotic, illegal construction zone as part of a campaign to force them out of their homes and replace them with market rate tenants.

Without a working buzzer, Jean, who can't walk downstairs alone, is unable to receive guests. She hasn't had a working stove in five months, and last September, as construction crews demolished neighboring apartments, a portion of the ceiling fell in her bedroom. She tripped and fell on the debris and ended up with six stitches to her head.

"I was in the hospital for two weeks," Jean, who asked that we withhold her last name, recalled this month. "And after that, I'm not what I used to be, let's put it that way. I lose my balance in walking and... my head hurts."

Most of the remaining tenants pay $1,600 a month or less in rent, according to their lawyer. A city tax credit supplement's Jean's. For comparison, at least one renovated unit was recently advertised for more than twice that. 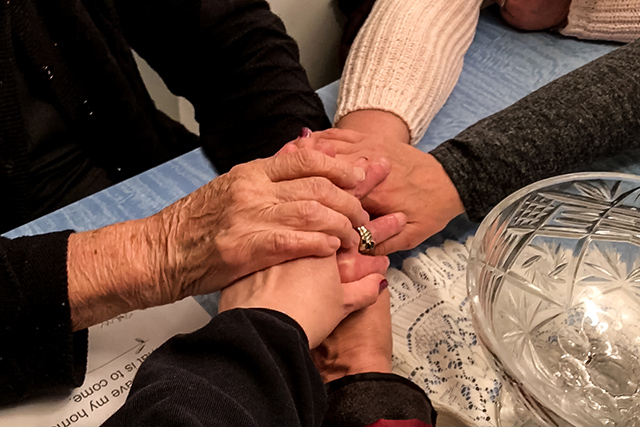 Jean holds hands with her neighbors sitting around her kitchen table this spring. (Courtesy tenants)

Tenant harassment as business model is a major issue in the East Village and beyond, according to housing advocates. "There's no way you can ignore it at this point," said Yonatan Tadele, a housing organizer with the Cooper Square Committee who is helping Jean and her neighbors sue Nazarian in housing court.

Landlords "rattle the branches, see if they can get tenants to take buyouts, try to get as many units empty as possible, then do the crazy renovations, then bing-bang-boom they've got most of the apartments in the building renting for an obscene amount," he added. "It varies building by building, but I've seen rents triple, quadruple, in some cases quintuple... smoke starts coming out of your head."

The umbrella term is predatory equity, according to Stabilizing NYC, a coalition of grassroots groups fighting the problem city-wide. They have four criteria, but a landlord need only meet one: high tenant turnover, complaints of harassment, poor building conditions, and a high debt-to-income ratio. As Urban Justice Center Stabilizing NYC coordinator Jackie Del Valle puts it, "The building is purchased for a much higher price than the rental income can support."

"There's not many small-time landlords anymore," Del Valle explained. "It's all part of a bigger market system. There's no understanding that these are people's homes, and housing should be for people and not for profit."

Notorious East Village landlord Steve Croman, who hired relocation specialists to intimidate longtime tenants and was recently sentenced to a year on Rikers Island for lying to banks about his rental income, is a prime example. Based on tenant and media reports, Stabilizing NYC estimates that these tactics are currently playing out in more than 3,000 buildings citywide.

"It's fair to say that we have growing concern because it's not like this is activity we haven't seen before," said Kerri White, a housing activist with the Urban Homesteading Assistance Board. Take the housing bubble of the mid aughts, which burst in 2008. "It ends up being a virus: when people start speculating on rent stabilized housing, it leads other people to speculate."

Records suggest that Nazarian has flipped at least one other building to date. He bought nearby 69 Clinton Street in January 2014 for $3.5 million, gut-renovated the building, and transferred the title in June 2016 for $8.8 million. The tenants' lawyer also points to a $3.25 million mortgage on the First Avenue property from New York Community Bank, currently number five on Public Advocate Letitia James's "worst banks" list, which tracks banks that loan to notorious landlords. (NYCB did not comment for this story, though it pledged to reassess its mortgage criteria earlier this year.)

Patrick Tyrrell, an attorney with Mobilization for Justice who is representing the First Avenue tenants in housing court, calls the whole process a "mutant, rabid, gentrification machine." 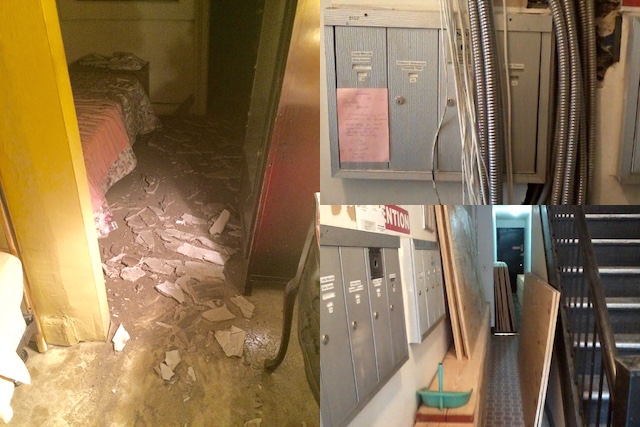 The two sides of Nazarian's First Avenue building illustrate different stages in the gut-renovation process. The left stairwell, in 194, is sleek and modern-looking, while the right stairwell, 192, is raw wood, with wires poking out of the walls.

Roommates Gina Kaimos and Linda Marzulla say they are the only remaining long-term tenants in 194. The other seven units turned into an active construction site last fall, after the rest of their neighbors left. Three have been rented to date.

"We didn't know what hit us," Marzulla, 65, recalled. "The people started leaving one by one. They would knock on my door and give me their stuff from the refrigerator."

She documented the construction meticulously, and keeps the photographic evidence in a thick, three-ring binder: dust filtered into their living room through the fireplace; windows were knocked out of the neighboring apartments, allowing wind to whip through all winter. Photos show stacks of boards partially blocking the front door, which the friends say was often left unlocked.

"Everything was open," Kaimos said. "There were wires hanging, they ripped our mailbox off. I felt totally disrespected. He [Nazarian] never offered to clean up and we did it every day and kept our mouths shut because we were afraid."

Tenants describe Nazarian as extremely hands-on, present in the building most days and at times gregarious—"Work with me, I'll work with you"—and threatening. This spring, tenant Hillary Johnson says she made some 311 complaints about dust seeping into her side of the building. A few weeks later, she says she received an aggressive email from Nazarian:

"If you keep complaining about dirty hallways two days after they are cleaned maybe I shouldn't spend time and resources to actually clean and let you live in the shithole you deserve?? Your [sic] playing with fire..."

"I was getting very, for lack of a better word, bullying responses to things," Johnson recalled.

Demolition started on the right side of the building in May, and those eight apartments have been without gas since June. Work has continued, tenants say, despite a full stop work order issued on August 31st over the lack of fire-stopping materials in the vacant apartments. Tenants believe Nazarian disabled their intercom system to deter inspectors. Meanwhile, they're never quite sure what they'll encounter in the hallways.

On September 1st, tenant Susanne Adrian's 11-year-old son arrived home from summer camp, and discovered workers ripping out steps between the second and third floors. Two were completely gone, a wide gap of slick dirt between them. "The workers actually lifted him," Adrian recalled. "They carried him over the stairs. He's a resilient guy, but that was definitely a weird and awkward situation for him."

"We won't tolerate landlords who use construction activity to harass tenants," a DOB spokesman told Gothamist, when presented with the allegations. He added that the Tenant Harassment Prevention Task Force, which includes both DOB and HPD investigators, visited both buildings in early June. At that point, DOB didn't find any violations on the side of the building that had already been gutted.

"Our overriding concern is to see that the tenants throughout the City have safe and decent homes," HPD spokesman Matthew Creegan said in a statement. HPD filed its own lawsuit against Nazarian on August 31st ordering him to correct and pay off five outstanding hazardous violations, including the broken intercom system, a sagging floor on the fourth floor, and the lack of cooking gas. Penalties range from $25 to $150, with additional overdue fees up to $125 per day. 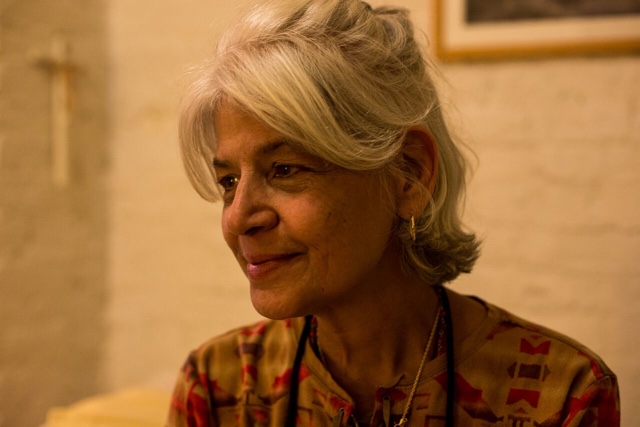 "These city agencies just could not act fast enough," Tyrrell, the tenants' attorney, charged. "The stairs are gone one day, the inspectors come a few days later, and by then they've already covered everything up, you know? So it falls on the shoulders of tenants to enforce the city's laws."

City Council bills introduced in June 2016 would address the predatory equity problem directly. One would require the city to identify red flag buildings, where the purchase price is much higher than the current value of the building. The city would then "go out and proactively talk to the tenants," according to Del Valle, of Stabilizing NYC. Another bill would create a task force to study the banks that frequently provide landlords with speculative loans.

Nazarian himself did not respond to multiple requests for comment, both about the lawsuit and specific tenant allegations that illustrate their fear. Nor did his law firm, Belkin Burden Wenig & Goldman. "Respondents deny each and every allegation set forth," attorney Brian Haberly wrote in a response to the tenants' court filing.

Marzulla jokes, darkly, that her newly renovated building looks like a mausoleum, with its steel grey tiling. "It's as cold as ice," she said. "Like you could pull bodies out of the walls." The dust has settled, literally, since she turned down a $100,000 buyout. But now Nazarian is decorating the backyard directly under her bedroom window. Marzulla recently heard that lounge chairs are coming. In addition to the patio, amenities on a recent listing include sound-resistant windows, a Bluetooth internal speaker system, a wine cooler, and marble countertops.

"I don't believe anyone has the right to take somebody's—how do I say the word—peace. And joy," she said. "Even if it's just sitting at a table with a soup: it's your joy, it's your house, it's your walls, it's your door, it's your bell. It's the church down the corner. It's Robbie at Veniero's. It's the dry cleaner, Roberto."

#east village
#gentrification
#Lionel Nazarian
#predatory equity
#longform
#original
Do you know the scoop? Comment below or Send us a Tip