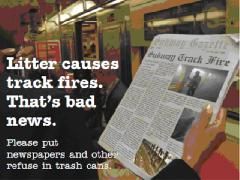 The MTA is sick and tired of your careless newspaper disposal, so they made a mock newspaper to school you in changing your ways! WNBC reports on the Subway Gazette, which outlines the hot topics underground, including how your trash can lead to subway delays.

Once on the tracks, trash can help spark track fires or clog drains along the roadbed and that can lead to flooding. Smoke conditions and flooding lead to delays in train service and, in the case of fires, they can be extremely dangerous.

The Gazette is sort of like the Smokey the Bear of the subway system! But why is the MTA only taking such action to inform straphangers now? Well, in the last four years the amount of trash removed from the system has risen 17% (that's a whopping 15,300 tons to 17,862 tons). Even though NYC Transit recycles "about 50 percent of everything our customers throw away" (a number they're working to raise) you could do your part by tossing your Times, Post, Daily News, amNewYork or Metro (and Subway Gazette!) in the recycling bin.

#delays
#fires
#mock paper
#MTA
#newspaper
#Subway Gazette
#trash
Do you know the scoop? Comment below or Send us a Tip