The MTA's Plan To Fix The Subway Will Cost A Fortune. Doing Nothing Will Cost Even More

Even before New York City Transit president Andy Byford presented his plan to save the city’s transit system, everybody wanted to know how much it would cost. There was no dollar figure formally included—after Governor Cuomo may or may not have strongly suggested any cost estimate be removed—but various news reports pegged the possible cost from $19 billion over a decade to $43 billion over 15 years. No matter what, it will be expensive.

But the first board member to speak after Byford’s presentation, Veronica Vanterpool, urged against what she called “sticker shock.”

“We need an honest accounting of what it is going to cost to fix our system,” she urged the board and, it seemed, the public at large. “It’s not going to be a number that sounds good.”

Indeed, $43 billion, or $19 billion, or however many tens of billions of dollars, doesn’t sound good.

But doing nothing would cost far more.

While it’s impossible to put an exact dollar figure on the cost of band-aiding the subway and bus system indefinitely, there’s widespread agreement that not only would it cost New Yorkers more to do nothing at all, every year we wait to implement the plan will cost us billions.

“Every year we wait on this we're forgoing the benefits of reliability and increased capacity,” said Rich Barone, Vice President for Transportation at the Regional Plan Association. “All those things that are costing us economically."

The Fast Forward Plan, the official name of Byford’s plan, calls for rapidly modernizing most of the city's antiquated signal and switch systems in 10 years, ramping up new car orders, a top-to-bottom re-imagining of the city's bus network, adding at least 50 new accessible stations within five years, and an overhaul of the MTA's organizational structure.

The item with the largest impact on the city's transit landscape would be upgrading the subway's signals to Communications-Based Train Control on 11 line segments by 2030, including most of the major "trunk" lines in Manhattan. Previous estimates predicted this work would be done by 2040 at the soonest, but Byford hopes to achieve this shorter time frame by minimizing the customization manufacturers have to do and closing segments on nights and weekends for up to two and a half years at a time.

Byford’s plan acknowledges that delays will increase costs: “It will become much, much more expensive if we wait and fail to address the underlying issues affecting our system.” Part of this, Barone guesses, is simply the fact that it costs more to do things later due to inflation, which has typically been around one to two percent in recent years. If the $19 billion plan is delayed by five years, inflation alone will raise the cost by $1.5 billion (or $3.3 billion for the plan’s high-end estimate of $43 billion).

That being said, the estimated costs of large infrastructure projects tend to increase at a greater rate than inflation—just look at Gateway and East Side Access—and one reason is that unionized labor and material costs tend to rise more than 1.5 percent per year, international trade wars notwithstanding. So, if anything, these inflation estimates are probably drastically understating how much the MTA will have to spend to do this later instead of now.

That is just the very tip of the iceberg, though, because there are many consequences to postponing a thorough, system-wide upgrade. Subway and bus ridership is falling and that’s costing the MTA money in lost revenue. Since the city’s population is actually increasing, this decline is due largely to poor service. In January through March of this year, average weekday subway ridership was down 3.6 percent over the same period last year, while bus ridership declined by a whopping 7.1 percent. Overall, NYCT lost $38.3 million in fare revenue due to this plummeting ridership. If this trend continues for the rest of the year, it may lead to a budget gap around $150 million. 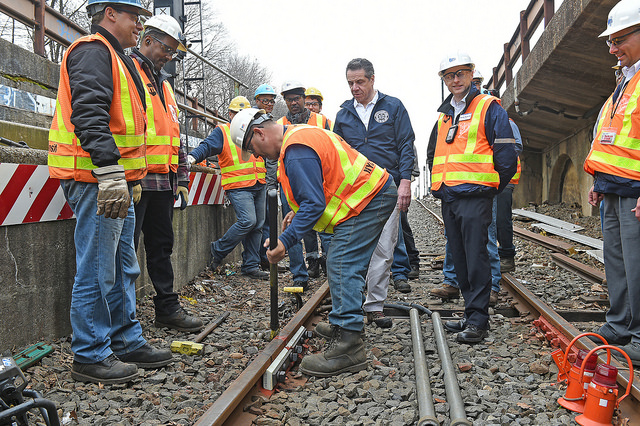 It’s difficult to predict how this trend would change over time—would falling ridership lead to a death spiral of cut service and still lower ridership, or would it flatten out after a certain point? And how will the widely-expected fare increase in 2019 impact revenue? Suffice it to say, it seems reasonable to assume, based on recent years, that ridership has peaked and that will portend bad news for the transit system’s bottom line.

Those non-subway-or-bus riders still need to get places, and this is where the biggest costs of not fixing the subway come into play. Almost all of those work-related trips, according to transit expert Charles Komanoff, will re-materialize as motor trips on street level, exacerbating the city’s brutal gridlock.

Using his Balanced Transportation Analyzer, a gargantuan spreadsheet that offers the most dynamic and complete accounting of how various factors impact the city’s transportation landscape, a continued decline in transit ridership at the current rate will cost New York some $900 million annually, almost all of which comes from lost productivity as people in both private vehicles, for-hires, and buses alike sit in even more traffic. Over just a five year span, that means not fixing the subways would leave us almost $5 billion in the red.

A lot of people, of course, will still be stuck on the subway because they can’t afford regular Ubers or taxis, and their lost wages from continued delays will add up. According to a City Comptroller report from last year, subway delays cost New Yorkers between $170 million and $389 million annually in lost wages, depending on the severity of delays. But if we do nothing, it stands to reason delays will only get worse, which could add another $2 billion or so over five years.

And this estimate only takes into account lost wages, not the total economic impact of lost productivity or people not doing their jobs. According to a New York Times Magazine feature last year, losing the subway for a month would cost the city about $60 billion in lost economic output. Of course, that’s only in the event of a total calamity, such as some kind of freak “super” storm, the kind that are expected to become 17 times more frequent over the next 100 years.

While the MTA is already taking steps to make the system more resilient for another salt water incursion, there’s an entire section of the Fast Forward Plan specifically on how the agency will make itself more resilient with a ramped-up budget. Hurricane Sandy cost the MTA at least $5 billion in repair costs alone. Plus, we have yet to experience the most consequential repair effort to date, the 15-month shutdown of the L line, which will surely impact ridership and result in millions of lost hours. Making the system less prone to flooding and securing critical parts now would save money when the next storm inevitably hits.

And then there are the incalculable but real consequences of all the people who decide not to move to New York (or leave) because of the city’s transit woes. According to the Regional Plan Association, the metro region is on pace to gain 850,000 jobs and 1.8 million more people by 2040. But Barone doubted whether the subway is up for the task of transporting all those people.

“The answer right now is no,” Barone said. “So if it doesn’t handle that, where do these people go? They don’t come here, right? I think that’s a valid assumption to make.” In that case, say goodbye to all the economic activity 72,000 new residents per year would bring. 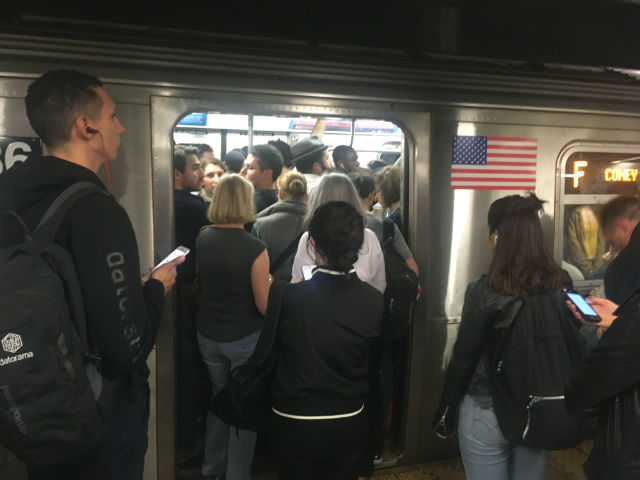 The daily struggle to board the train (Gothamist)

It would take years of academic study—and the cooperation of the MTA, who declined to do so for this article—to create a full and complete accounting of how not fixing the subway would cost New Yorkers. But even this very basic math shows the Fast Forward plan will pay for itself simply by not having to live with the consequences of not doing it.

If we don’t invest in a long-term plan to rehabilitate the subway, we will keep having to fund emergency measures to patch it up. Last year, the MTA launched an $836 million Subway Action Plan designed to do just that, which came about 20 years after New York mayors and governors first started slashing the MTA’s maintenance budget. If nothing changes, we may have to do it again in a decade or so (since the Subway Action Plan does not eliminate the entire maintenance backlog). Factoring in a decade’s worth of inflation to parts and labor costs, to do the exact same plan ten years from now would cost around a billion dollars.

The Subway Action Plan, you may recall, also led to a protracted battle between Mayor de Blasio and Governor Cuomo over who would pay for it (de Blasio eventually relented and paid for half as Cuomo demanded from the outset). All indications are we’re in for another tug-of-war between the two with the MTA as the rope. When asked who would pay for the new Fast Forward Plan, a spokesperson for Cuomo’s office referred Gothamist to recent interviews where Cuomo advocated for congestion pricing and dismissed the millionaire’s tax as “not a feasible alternative.” De Blasio’s office did not return a request for comment, but the Mayor has previously said the city is unwilling to contribute towards the plan.

But unlike the Subway Action Plan, nobody’s going to find the money for these fixes under the budgetary couch cushions; nor is congestion pricing or a millionaire’s tax alone likely to be enough. Komanoff has estimated congestion pricing could yield as much as $1.5 billion per year, which is a good chunk of change but short of funding even the low estimates for the Fast Forward Plan. De Blasio’s millionaire’s tax can produce about half that. Nor will increased fares foot the remainder of the bill, since that revenue has already been counted on by the MTA to meet its various looming budgetary gaps.

While we’re no doubt in for a long debate about how exactly to fund this plan, it’s vital this isn’t presented as a false choice. There is no alternative. The city’s crumbling transit network is a bill that has come due. The only question is whether we pay for it now or later.

#andrew cuomo
#andy byford
#fast forward plan
#MTA
#subway
#subway action plan
#transportation
#we the commuters
#original
Do you know the scoop? Comment below or Send us a Tip