When the MTA invites the public to weigh in and offer feedback on its fare hike proposals, it's like an invitation to a pie-throwing contest.

But that's what's happening for the next four weeks in all five boroughs, Long Island, West Chester and the Lower Hudson Valley. Here are the subway and bus fare proposals (PDF): 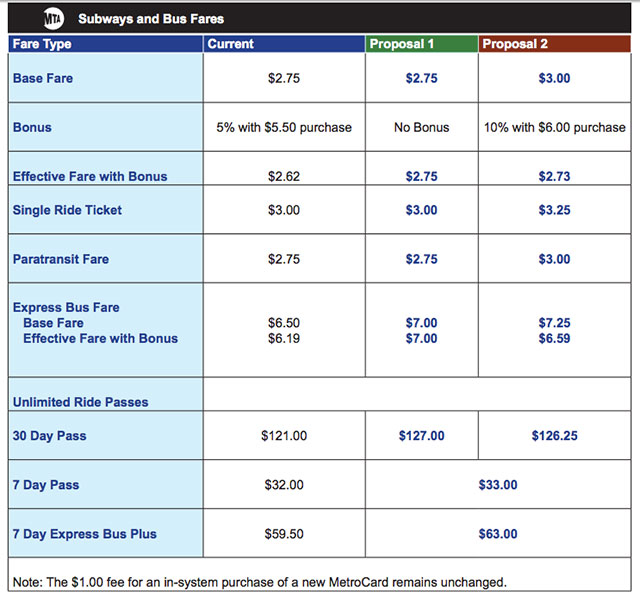 Governor Andrew Cuomo said he's against the fare hikes, and recently suggested that the MTA could save money by fixing its own culture. "The MTA's first job is to look within," he told Brian Lehrer earlier this month. "There is waste, there is inefficiency, that currently goes on at the MTA that has to end."

"The MTA has be to be restructured, fundamentally, from the board down, and the way they contract and procure... they're too tolerant of delays. A deadline is a deadline. You can't move a deadline," Cuomo said, speaking on WNYC.

The MTA's financial plan update in November showed the agency looking at a possible deficit of more than $1 billion by 2021. The agency said there's a variety of reasons for a decrease in revenue, including competition from Uber and other ride hailing apps; as well as fare evasion, although it provided no evidence of this (that data is promised at the December board meeting).

New York City Transit President Andy Byford said the question is not when to raise fares, which he seems to fully expect will happen next year, as scheduled, but by how much.

"If we don't have a fare rise it makes things even worse, the hole gets even bigger," he said, speaking on WNYC last week about the MTA's budget.

If the agency can't close the budget gap, there could be an additional 10 to 15 percent increase in MetroCards fares over the next four years, which could also be accompanied by cuts in service.

"I will not preside over draconian cuts in service, which is exactly the wrong thing to do just as we're trying to get people back onto transit," Byford said.

Disability rights advocates plan to protest outside Tuesday's hearing demanding no fare hike until the MTA makes the entire system accessible. Under one of the MTA's fare hike proposals, Access-A-Ride users face a .25 cents increase.