In between rush hours, there’s an out of service J train cruising the tracks, trying to set off speed limit signals.

The train has three MTA workers on board. One is driving, one has a radar gun pointed out the window and is shouting out the train’s speed and the posted speed limit. Another stands back with phone in hand, ready to log the ID of any malfunctioning signal. They brace themselves—ready for the emergency brakes to kick in at any second—sending the train lurching to a stop.

The only way to find faulty signals is to set them off.

Listen to WNYC's Stephen Nessen as he joined MTA workers as they looked for faulty signals:

Since September, this crew has been driving over every piece of track trying to trip the grade time signals. These mechanical signals, sometimes known as signal timers, are found on every line, except the L, and trip the train's emergency brakes if a train is going faster than the posted speed limit.

Out of more than 2,000 of these signals throughout the city, this crew, which has surveyed about 90 percent of them, has found more than 200 that trip the emergency brakes when the train is going the posted speed limit. The speed limit varies depending on the section of track. 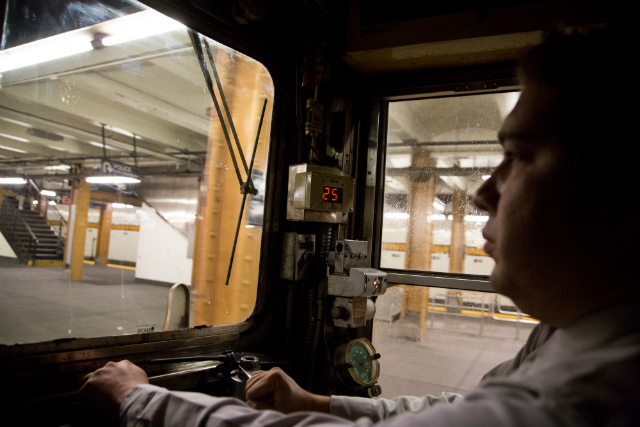 The MTA has always had signals to prevent trains from speeding, and after the Union Square derailment in 1991 and the crash on the Williamsburg bridge in 1995, the agency installed hundreds more signal timers at major terminals, and at steep or curvy sections of track.

But over the years, the agency hasn’t always done a good job of maintaining them or checking whether they even worked. One reason a signal timer may not be functioning properly is someone accidentally moved one, which would throw off the timing on the mechanism, causing the emergency brakes to engage.

Train operators are told during training to play it safe and drive under the posted speed limit to avoid tripping signals.

"You take your cues from the work culture from the training and they tell you to operate at five to seven miles per hour under the posted speed," said Zach Arcidiacono, the union representative for train operators, who was an operator himself for 11 years.

And train operators have a real incentive not to set off signals. There’s a five-day unpaid suspension for setting off a signal timer the first time, 10-15 days for a second offense and possible dismissal for a third offense. Workers can also pay a fine of 30 percent of their wages in lieu of a suspension. Except for a few types of trains, most do not have a black box event recorder, so when it comes to a broken signal timer causing the emergency brakes to go off, it’s often just the operators’ word against the MTA’s.

The operators often lose their case, according to the union, and infractions can stay on a worker’s record for as long as 20 years.

For years the union had begged the MTA to review its signal timers to prevent unwarranted suspensions but their requests “fell on deaf ears,” according to Arcidiacono. Until Andy Byford came along last January.

“My philosophy is that you should talk to your staff, they know best. Our front-line operators are fantastic professionals,” Byford told Gothamist. “They told us this is one area we could absolutely improve service.”

"This is kind of a breath of fresh air doing a review of these issues," Arcidiacono said. He added that in one case already a worker who had been charged with running a train above the speed limit, setting off a signal, was exonerated when the union discovered he'd hit one of the faulty signals that Dominguez and his team had discovered.

He said the union isn’t about to go and dredge up every old case. “There’s a fear that if we start talking about it maybe the bureaucrats above us will abort the whole mission, so we had a thing let’s not talk about it too much,” he said. “We certainly want to fight for people with disciplinary records and to fight to have any case overturned or overhauled if there’s an error.” 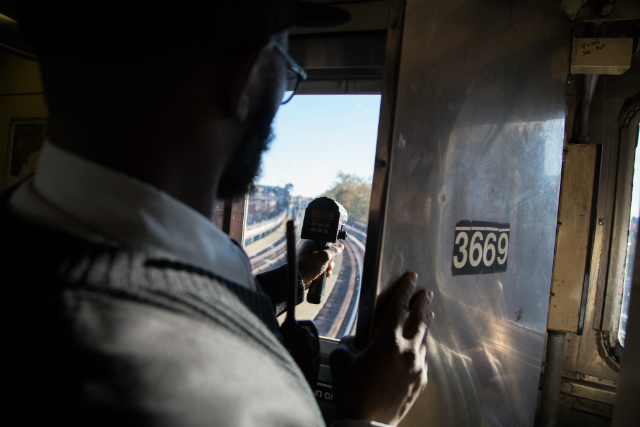 Back on Dominguez’s train, once they hit the Bronx, the train turns back around again for the Coney Island yards. On this particular day—cruising along the D line—he hit 100 signal timers, and set off five he hadn’t logged before.

He said many of the faulty signals are clustered around south Brooklyn on the N, Q, and R lines, with several around Dekalb and Atlantic Terminal. He can't say for sure why, other than there are a lot of speed restrictions and complicated junctions where trains switch tracks at those locations.

Dominguez added the agency isn’t waiting for him to finish his survey to fix the problems. The MTA already repaired 12 signals on the R, D, Q, B, N and 2 and 3 lines. As the signals are being fixed, the MTA is also looking for other ways to speed up every ride—like increasing the speed limit where possible.

Dominguez said he found over 50 locations where the speed limit could be safely increased a few miles per hour. "Even a few miles an hour can make a big difference. If you have a section of track that's 1,000 feet long and a speed limit is 10 miles per hour today, and perhaps it could be 15 miles per hour without much work, well we might save 10 seconds right there," Dominguez said. "Add that to our station stops and slow clearing signals and we're talking saving minutes."

On his long journeys between terminals, Dominguez is also working on a smoother braking method when pulling into stations. He found with careful concentration he can apply the brakes in one continuous motion once the train is half-way into the station, rather than making little herky jerky stops until the train gets to the end of the platform. He figures this is another way operators could shave off a few seconds at each stop.

Ten seconds might not change your life, but the MTA is betting that ten seconds here and ten seconds there will eventually add up to something all riders will notice.