The MTA Is Getting REAL With Its Subway Delay Announcements

Soon after MTA chairman Joe Lhota took charge (part time) of the struggling subway system last month, he promised to implement an $800 million rescue plan, which included such future improvements as standing-only cars on the L line, and more frequent subway track cleanings to reduce track fires. While some of the forthcoming improvements are still being rolled out, one notable change is already being detected by commuters: more detailed subway delay announcements from conductors.

NY Times reporter Maggie Astor noticed the enhanced specificity a couple of weeks ago when her 3 train came to an abrupt stop just outside the West 72nd Street stop on the Upper West Side. "Ladies and gentlemen,” the conductor said. “I have bad news. A passenger just jumped in front of the train."

The specificity of the announcement is a departure from what has long been generic, standardized MTA language when communicating about delays. Typically, announcements of this nature refer vaguely to "police activity" or "a sick passenger." Now the MTA hopes that a more informed ridership will be a less enraged ridership. Astor reports that it's already having the desired effect:

...the bluntness of “a passenger just jumped in front of the train” did something. This time, what we were experiencing was a human tragedy instead of a personal inconvenience. Someone, a living person who had been standing unhurt on the platform just moments earlier, had been struck mere yards away. Later, news reports would confirm what we had already guessed: The victim had died. And so we did not complain that we were stuck underground in a packed rush-hour subway car.

Ideally, of course, the MTA will figure out a way to reverse the trend on all these maddening subway delays. But clear communication can certainly help commuters cope with the pain and aggravation, while also enhancing their Twitter complaining.

"And to your left you'll see the stalled train causing us to be delayed"- my @MTA conductor like we're on a safari of shitty infrastructure.

So please be patient, and listen closely for future announcements about how your F train is "being held momentarily by Improv Everywhere flash mob" or how there are "photo opportunities with a dead shark up in the first car." 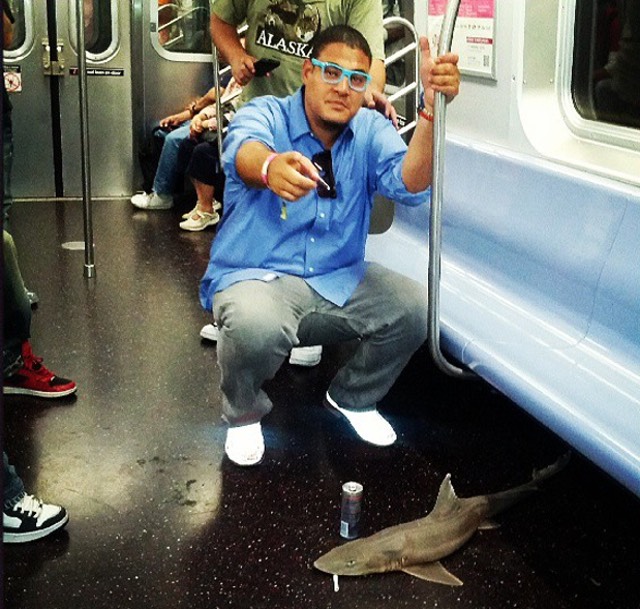 #announcements
#communication
#MTA
#subway
Do you know the scoop? Comment below or Send us a Tip