On Thursday, the MTA board voted unanimously to pass a new round of fare hikes for 2015—starting in March, the base subway/bus pay-per-ride fare will be raised from $2.50 to $2.75, with an effective fare increase of 4.1% across the board. You can see a full list of the changes below (via MTA). 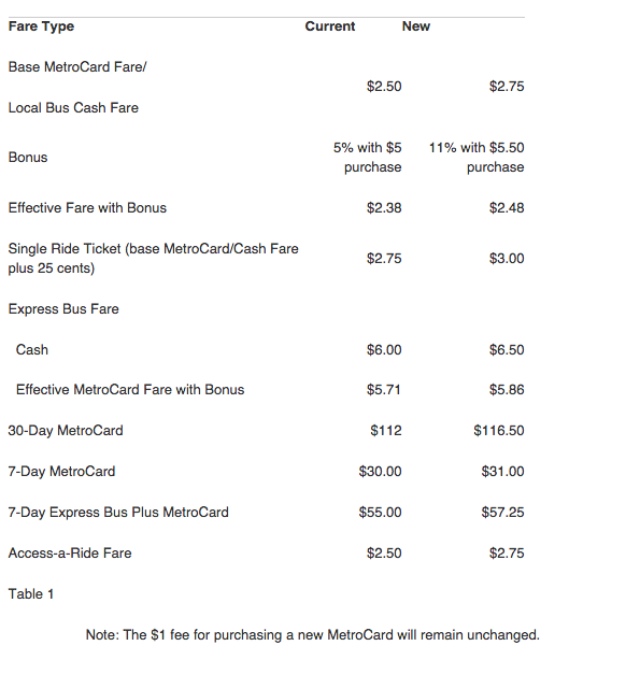 Ever since the last fare hike a few years back, the MTA has been scrutinized for how they dealt with excess change caused by the often strange numbers that came out of those ubiquitous 'bonuses.' They argue that critics completely missed the advantages of the new system, which encourages people to conserve everything on one card, and keep rolling the excess change forward. "Balance is a moot point because customers can refill their cards in three ways: time, money or both to existing MetroCards now."

Nevertheless, if you are someone who really wants to squeeze every penny out of your straphanging expense account, you'll want to know exactly how that all breaks down on a ride-by-ride level. We've taken a page from I Quant NY, who crunched the numbers last year and figured out exactly how much you should pay to be able to use up your cards fully.

Take a look at our chart below, with all numbers rounded up to end in 5 or 0. 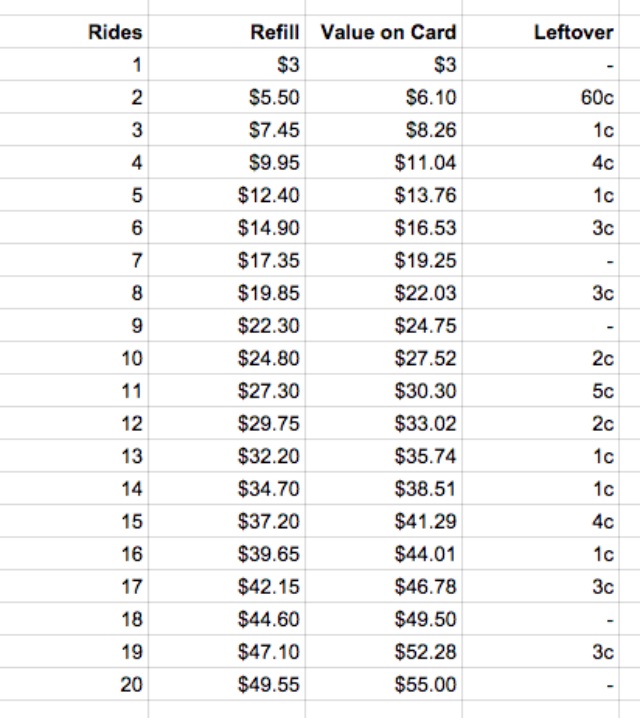 Obviously once you start getting into the higher amounts, you should probably consider stepping up to the 7-day or 30-day unlimited MetroCard. The big "X" factor will be at what prices the MTA sets the suggested fare amounts on the MetroCard machines—previously it was set at $9, $19 and $39 increments (plus those wacky bonus amounts), but they say that may change with the hike. "We are in the process of reprogramming and will decide on the pre-determined denominations for MetroCards at MVMs in the next several weeks," MTA spokesman Kevin Ortiz told us. He added that despite the hike, the "break even on trips for a 30-day card was and remains 48 trips."

So hopefully this helps! At least for a little while longer until the MetroCard becomes as extinct as a token booth.

[With additional mathematical computations by Jessica Warriner and Ariella Cohain]

[Note: while we fiddled with our numbers, I Quant NY put up their post on this. We differ on a few cents, though]

#fare hike
#metrocard
#MTA
#subway
#train
#original
Do you know the scoop? Comment below or Send us a Tip